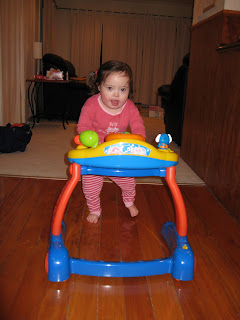 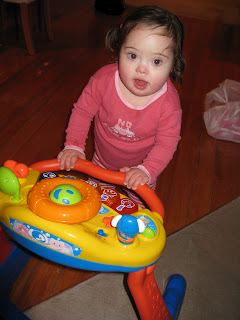 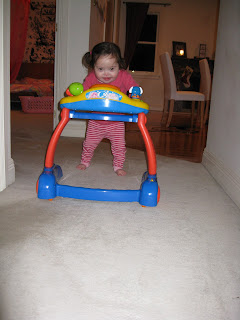 Here is Miss Lilly walking around the house. She loves pushing this thing, but the problem is, now she thinks everything is pushable. Like the dining room chairs, her toy chest, and the coffee table. Nothing is off limits. Speaking of the coffee table, her new trick is climbing on top of it. We placed it strategically in front of the television, so that she would stop turning it off and on and changing the channel; but instead of letting that stop her, she easily climbed right on top of it. Now she climbs on it, crawls on it, sits on it, and especially, presses all the buttons on the TV while on top of it. She's getting smart about it though; she can now press a button turn off "Elmo" DVD and turn on "E" channel (my favorite here), and then knows which button to press to turn back on her Elmo DVD. And she knows for certainty which buttons turn the volume off and on and which turns the TV off and on. Sometimes Lilly will be playing with her toys, and I'll leave the room for a second - and all of a sudden the TV is on and she's watching her show. Smart cookie. :) I'll try to catch her in action tonite and upload more pictures.
Posted by Cathleen at 6:38 PM