December 10: We got to the airport at 6:55, and started walking from the parking lot to the Airtran counter - not very far compared to some airports, but carrying 3 suitcases, 2 carryons, a stroller, Lilly, and my purse, plus two tired and cranky adults was not a fun walk. (Note to self: next time leave 5 minutes earlier and get a cart to carry it all.)

The positive part is that, after checking in at the Airtran counter, we never had to really worry about our luggage again. Disney must realize that we all hate lugging our bags all around, so after we checked it in at the airline counter in Richmond, it "magically" gets picked up at the Orlando airport and appears outside our room on the cruise. So after we happily turned in our luggage, we walked over to security... and then realized we left our passports at the Airtran counter.

After another quick squabble by two tired grown ups, Jon went back and luckily they were right there. 10 minutes later we were at the gate and they were already boarding! Which would have been perfect timing except... I still had my migraine from the day before. So my wonderful husband knew it would only get worse if I didn't have coffee and he went to get me a cup, and a few minutes after that we were in our seats on the plane and it was taking off!

Lilly has flown many times before so the flight was easy, except for the man next to me sleeping, and my migraine of course. But less than two hours later we were getting off the plane in Orlando! We were so happy the morning went smoothly because we were so nervous about potential flight delays and missing the cruise! We got off the plane and called my sister Christine (& husband Chris & son Matthew) who were staying at a nearby hotel and were going to meet us for the bus to Port Canaveral. We had arrived a few minutes early to the airport, but they were already on their way. While we waited, Lilly took some pictures with her favorite characters at the Disney store at the airport.

(By the way: Lilly's dress was actually my dress as a child, which was very cool to me. And she got so many compliments on it that day!) 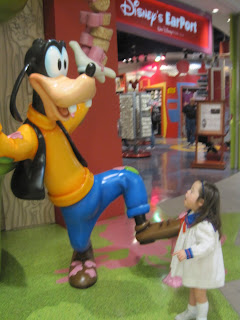 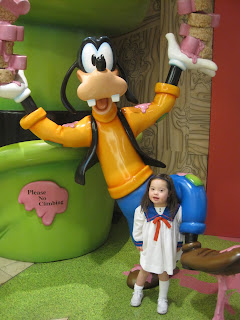 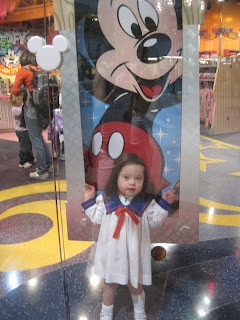 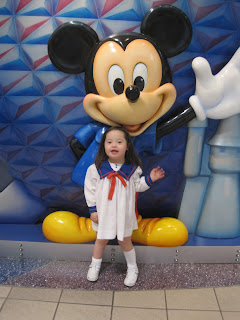 Then we walked down to check in for the bus to the cruise. Disney made it super easy and when we got to the Disney Cruise counter at the airport, they immediately checked us in for the cruise as well, which meant that we didn't have to check in at the port. The additional bonus was that we were given boarding pass numbers of 3, which meant that we were in one of the first groups to board once we arrived at Port Canaveral. (I think it goes 1 through 12 maybe? We actually boarded about 10 minutes after boarding pass level 1 so it was very nice.)
Christine, Chris and Matthew arrived and a few minutes later we all boarded the bus to the port! Jon and Lilly sat together and immediately fell asleep, of course. Within 45 minutes we arrived at the Port. Colleen, Lyndsey and Julianne were already there and checked in. Then we got in line for pictures with Mickey! 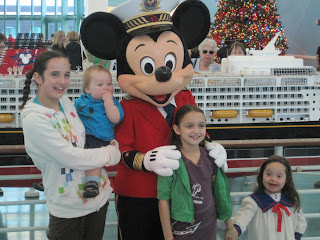 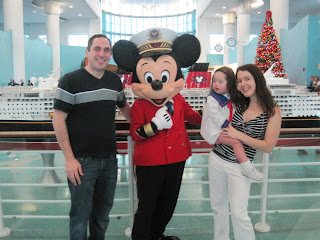 I absolutely loved all the Christmas decorations that were everywhere on the trip, even at the Port! Lilly loves Christmas trees. 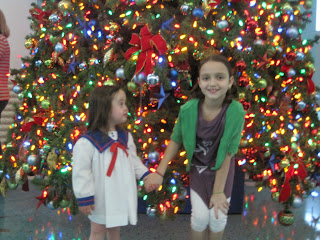 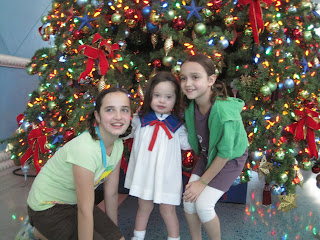 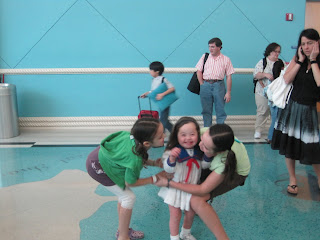 And finally we boarded the ship! 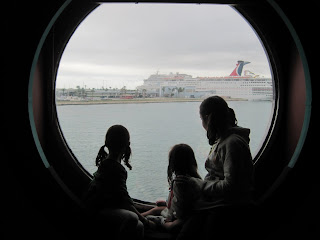 We went straight to lunch at Parrot Cay, which was a buffet lunch. Scott, Donna and Jacob arrived shortly after. A few characters were walking around. Lilly got to see Mickey again. :) 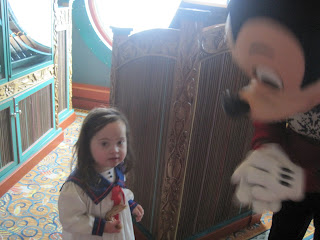 After lunch, we went to our rooms finally. Being on a cruise ship, they weren't huge, but it wasn't ridiculously small either. It reminded me of a motor home a little bit - they made use of every little space. We were in a category 11 room, which is the smallest room, and honestly it was fine for us. Some of our group had cat 9 or 8 rooms which have a window and a split bathroom, but honestly for the price I'd probably book a cat 11 room again. Our room had a bed/bedroom area, a living room area with the couch that flipped over into Lilly's bed (although see if she actually slept in it!), and a bathroom with a bath. The bath was important to note because apparently not all cruise lines have rooms with baths but I believe all of Disney's cruise rooms have a bath.
After settling in, we went to the farewell party which was fun, and by that time Jenn & Brian & Cassidy arrived. Then we all went to dinner. My migraine was really killing me at that point, and I sometimes feel nauseous with migraines, but it also might have been the ship so I took a Bonine. I never felt nauseous again the entire trip (and luckily the migraine was gone by the next day). After dinner we went to a lounge area that had dance music and the kids started dancing. Here is a funny picture of Lilly dancing with random stranger kids - I just think it's funny the way they're all doing the same weird move! 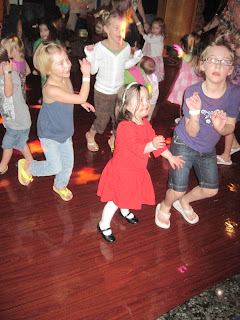 And here is the dancing queen... 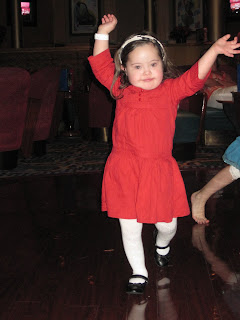 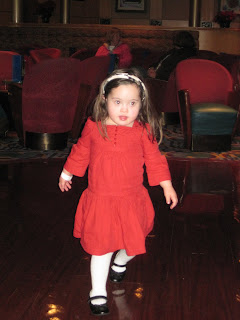 So that is the end of day 1... It was fun and exhausting. :) My impression at the end of day 1 was that I was a little overwhelmed by the cruise experience because it was new to me, but I was very impressed by the cruise ship and the ease of how everything went so smoothly that first day between traveling and settling into the cruise.
Posted by Cathleen at 8:39 PM

LOL, I looked at Colleen's girls and thought "WOW! Those are Gembeckis!" Lily too, but new faces make it happen all over again! And you're all gorgeous, of course!