Disney World Part 1: Getting There is Half the Battle

Last Friday. I woke up early, but Lilly slept in. Too much so, actually. I finally woke her up and got her dressed quickly, and there was no time for breakfast. So, we grabbed our suitcase, backpack, carry-on, and Lilly and I went downstairs to hail a taxi. I failed to realize it was raining, and that every person in NYC needed a taxi that day. After 30 minutes we finally got in a taxi - except it was the "wrong kind." (Lilly hates the mini van taxi's - she likes the SUV's, the traditional, and the station wagon's - but something about the mini van makes her upset and she doesn't want to sit down and get her seat belt on.) Finally I struggle to get her to relax and the taxi is off. 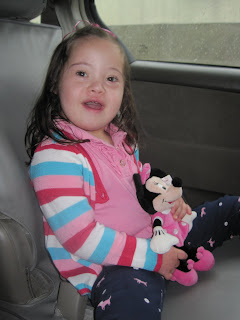 For about a minute, until we encounter the worst traffic I've ever seen in NYC. We are bumper to bumper, and finally leave Manhattan towards LaGuardia airport. Traffic is still horrible, and we encounter one stretch of road the is flooded out; we barely got through and apprently they shut it down right after us. Lilly is bored and hungry; I'm stressing about how long it's taking us to get to the airport. Finally, we arrive with just an hour to spare (which doesn't sound like it's cutting it that close, but remember I'm traveling with a small child).

I go inside to check our bag, and the line is around the corner. So we go outside to check it curb-side. I get in the shortest line, and the elderly couple is just finishing checking their bag. Almost relieved, and then they call over to the rest of their family who cuts in ahead of us and checks all their luggage - along with complicated carseat check-in's, all different tickets, etc. The whole time, I'm bribing Lilly with a bagel as soon as we get through security. Security was another long line, and I can see a sign for a Dunkin Donuts on the other side. Lilly was so excited about her bagel. We stand in yet another long line at Dunkin Donuts, I get my coffee and order a bagel - and they're out of bagels. Are you kidding me??? Oh and they're also out of coffee lids. Great. Nothing like pushing a hungry child in an umbrella stroller with two carry-on's and a burning hot coffee with no lid. So we wander around the airport looking for something for Lilly to eat, and finally we find a place that sells bagels. We order a plain bagel, and they only have cinnamon raisin left. Lilly's never had that, but we got it anyways, and she thought it was ok. So after all this we walk to our gate, and our flight is now delayed 90 minutes. In the waiting area, Lilly met a little girl who was 6 years old who became her best friend. They did the hokey pokey together, they talked about princesses and mickey mouse (figures every kid on the plane to Orlando is headed to Disney); Lilly had the best time with her new friend.

After two hours of entertaining ourselves, we get on the plane and sit next to the most un-kid-friendly man - this is going to be a long 3 hour flight! I put a pull-up on Lilly in case she had to "go" - although she never wears them on planes or during the day anymore, but this was a longer flight and with the weather issue/delay I didn't want to be stuck with not being able to get her up. The delay actually worked in our favor; we were ready for take-off around noon, and I managed to convince Lilly that she needed an early nap. I sang the "Peanut Butter" song to her until she fell asleep, right as we were rolling down the runway. I spent the next 90 minutes in peace - got a Diet Coke, ate snacks, read a magazine. Then Lilly got up, and we did stickers for awhile (a new Princess sticker book which she loved). We colored, took care of "Baby," and had a great time. And, Lilly never wet the pull up, even when she napped, so no worries about her on the plane.

By the way, did I mention that the entire day I was barely able to move my back/neck and was in incredible pain, AND I had a migraine? By the time we arrived in Orlando, my head and back were hurting so much I could barely focus. I got us through the airport, on the train to the main terminal, and downstairs to the Disney Transportation. 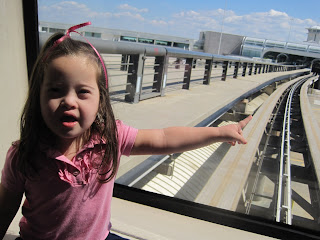 We were directed to an empty line - which in theory should be good news - but of course we know that means that a bus to our hotel had just left. Luckily, someone saw us waiting and got Lilly and I (and a random man that was standing behind us who they thought was my husband?) onto the bus right before it left. When we got on the Magical Express bus, the two elementary school aged boys behind us were playing so rough - literally kicking, beating each other up kind of horseplay - at one point the dad was like "Easy, killer!" to one of the sons - I'm sorry but if you call your son "Killer" as a nickname, he's going to be a little nuts! Lilly was so good on the bus, she was reading a Mickey Mouse counting book, and talking to me about the trip. 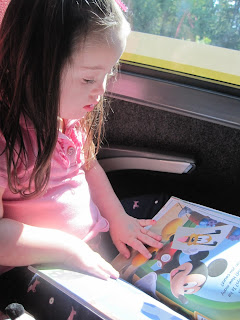 We got to the Polynesian 30 minutes later, receiving our lei's and a cookie when we entered the lobby. We checked into our room, there was a mistake and they didn't have a room assigned so we had to wait a few more minutes until we could get into our room. I thought bad news, but then it turns out we were upgraded to a Magic Kingdom view - perfect view of the castle. We were also club level, 3 doors down from the lounge (we had booked club level, so that part wasn't an upgrade - but we got a great deal with my Passholder discount).

At this point, it was too late to go to the Wide World of Sports to pick up my race packet before we went to dinner, so I decided to hang out in the room for an hour before our dinner at the Grand Floridian. We settled in, got a bite to eat at the club lounge, and turned on Camp Rock in the room. Miss Lilly also requested a bath, and had a blast playing in the water!

My head was KILLING me by this point, and I lay down on the bed, and sweet Lilly rubbed my hair - "It's ok, mommy." (Love her!) We got dressed, and I told Lilly: "It's time to go see Cinderella!" She said "No, I don't want to!" I tried convincing her, and she refused to go. Finally, I told her we'd see the "prince" and she hopped up to go - that girl has her priorities straight. We got on the monorail for one stop to the Grand Floridian, and went to 1900 Park Fare for the Cinderella/Prince/Stepfamily dinner. Going to a character buffet with one adult and one small child ensures that you're not really going to get anything decent to eat - there was tons of good food to choose from but we both just ate off the kids buffet to save time and sanity; I felt sick from my head hurting, and every time we were about to get up, a character was waiting to see my princess. Cinderella was exactly as she should be - gracious, sweet. The Prince was charming (haha) as usual, and Lilly loves him. He asked her: "You're really here to see Cinderella, not me, right?" And I said - "No, she actually didn't want to come for Cinderella; it was your name that got her moving!" The Stepmother was a little cold as is her character, but not as scary - she actual made small talk with Lilly. And then, the stepsisters. 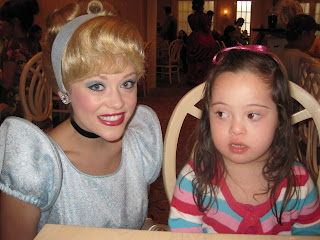 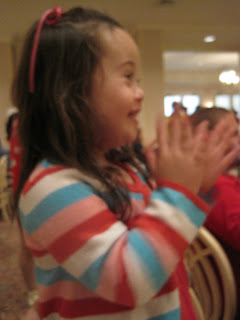 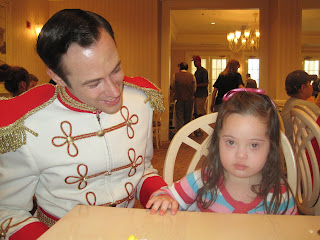 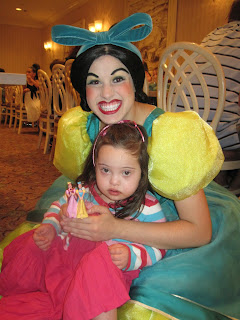 The stepsisters are what makes the meal. Everyone loves Cinderella and the prince, but they are dignified and nice. But those stepsisters are hilarious. Anastasia came over first, and saw Lilly's little figure of the stepsisters and she hollered over to Driscella: "LOOK! COME SEE THIS!" And the other one left her family that she was talking to and ran over and they gushed about how Lilly has a figurine of them, how cool is that, etc. Lilly was looking at them like they were nuts, but it was funny to watch. When Driscella came back to our table a few minutes later, she asked what Lilly's name is. Lilly said "Lilly" and signed an "L" and Driscella said: "You know sign language too?! My name is Driscella - D-R-I...." and she signed the whole thing. It was such a moment, she and Lilly were signing letters together and she asked what Lilly's favorite sign was, and Lilly said and signed "I love you." It was precious, she gave Lilly the biggest hug, and she kissed Lilly on the forehead. 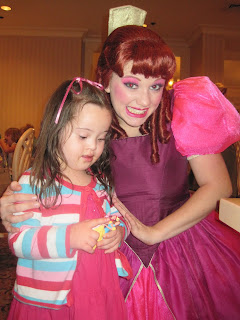 After dinner, we went to the Wide World of Sports to get my race packet. As we got back on the bus headed for the Polynesian, my head and neck hurt so badly, and Lilly invited me to lay my head in her lap. I did, and she sang the peanut butter song to me, just like I did to put her to sleep on the plane hours earlier. Such a sweetie. We went back to the Polynesian, got dessert from the club lounge, and got ready for bed. At 9:30 we looked out our window and watched the fireworks. When the fireworks were over, Jon finally arrived from NYC, and we got just a little more dessert before we settled down to sleep, first setting the alarm for 5:30 am...

There were a lot of things that were nuts, but it was one of the best days I've ever had with my girl. She is such a good companion, and it was wonderful spending the time with her.

Next up... would my headache and back pain go away? Would I be able to run the big race?
Posted by Cathleen at 3:01 PM