I recently got the idea to get Lilly a map or a globe to show Lilly where she's been, and where she's going. So much of her life revolves around geography: living in Virginia, New York, and soon DC; visiting Atlanta and Orlando; living abroad for her New Zealand year; vacationing in Fiji, Australia, Puerto Rico, Bahamas; and soon this summer, cruising all over the Mediterranean. Airplanes are totally not a big deal to Lilly anymore (whereas, to my city girl, a car is a unusual thing) - she asks almost every morning if we're going on an airplane that day - because we do have about a trip almost every month.

But does she realize that when we get on an airplane, we travel really far away? Does she have a concept of where we are, and where we're going? We started by going to our neighborhood toy shop, where we found globes for $99. While apparently the price is justified by the fact that the globe is electronic and talks, it definitely not the kind of investment we were looking for.

Instead, I found a large folding map at Barnes and Noble for $10 and hung it on the wall. I wondered if this was going to be one of those moments where I'm excited to show Lilly something new and she totally doesn't care (like the portable electronic game system I bought her for Christmas that she hasn't picked up since), or if it'll be one of those magical moments that we'll remember forever.

It turned out to be a great experience. Lilly totally understood different places on the map, and how we take airplanes to get there. She quickly identified that we live in New York City, that Grandma and the rest of the extended family live in Atlanta, that she used to live in New Zealand and Virginia, that we're going to Barcelona to play, and Naples to eat pizza and will celebrate Mommy's birthday in Corsica. We went over everything and she remembered the second time where each place was and could easily point them out all by herself.

And then I asked her, if she could go anywhere in the world, where would it be. She looked at the whole map, and pointed to Spain. Good girl, we said, we'll be there in 3 months. And then we asked her what's one other place she'd like to visit... and of course our little traveling girl put her magic wand on South Africa. And Jon immediately offered to take his little girl on a safari there when she's a little older. (It's funny because he's always said he wanted to do that with Lilly, and so it's ironic that Lilly randomly chose it!)

We'll be keeping the map on the wall for awhile, so Lilly can continue to map our her future. 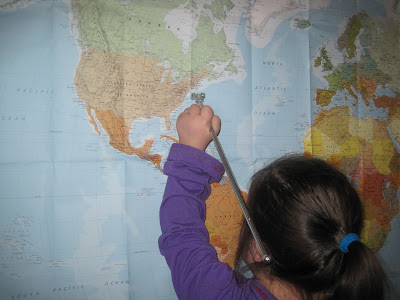 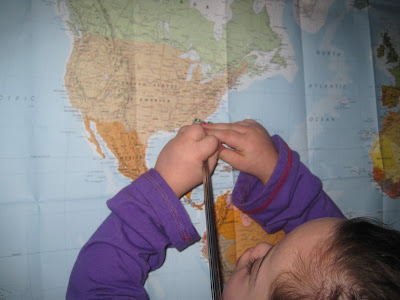 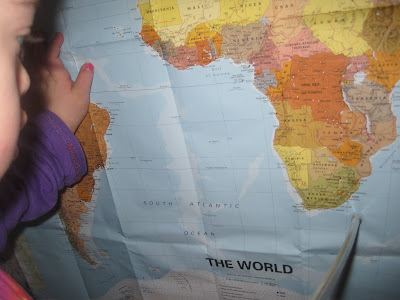 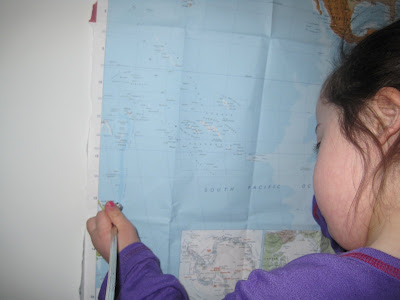 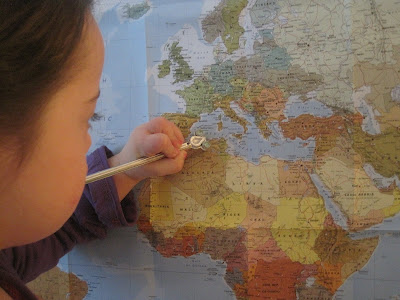 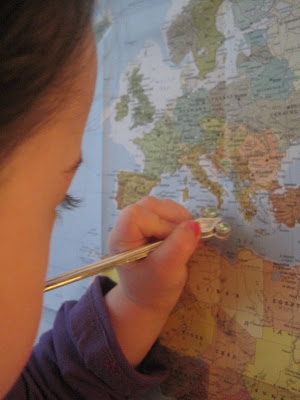 That is such a cool idea! Although, with my kiddos we don't need a world map, just the southeast- Georgia, Alabama, Florida, and the like. No traveling abroad yet for us. I bet when Lilly grows up she'll continue to love/passion for travel!

What a great idea!!! Lilly sure will have an extra large number of dots to plot after this summer!

Samantha knows that Nana and Granddad live in England and that we went there last year. We live on the Dulles flight path, so whenever I point out a plane she says it's going to England to see Nana and Granddad, then immediately pretends to call them up and have a very detailed conversation with them. LOL

Our girls are lucky to have had those overseas travel experiences. Now to tackle the home turf...