We all slept in past 8 am Tuesday morning, which was good because we’re getting adjusted to the time change but still feel like we’re relaxing on vacation. Lilly went to bed at 11 the night before but she’s been taking naps so it’s fine. We got ready for the day, and headed down to breakfast.

The best thing about our stay at the Hilton Diagonal Mar – aside from our beautiful room with the gorgeous views of the ocean – and the super friendly employees – was the breakfast that was included in the cost of the room. We weren’t aware of this when we booked (we booked through Disney) so it was definitely a bonus. It was in a restaurant, buffet style, with coffee (me), espresso (Jon), and milk (Lilly) served to us immediately upon sitting down. The food itself was good – the typical hotel breakfast fare, with some extras. We were all starving that morning so we were happy to have the food. I especially love buffet breakfasts for Lilly when we’re on a vacation, because it’s an easy way to make sure she gets multiple food groups – fruit, cheese, bread, eggs, etc. (Many times when we eat out for lunch and dinner it’s the standard chicken and fries, so breakfast is where we get more diverse nutrition.) 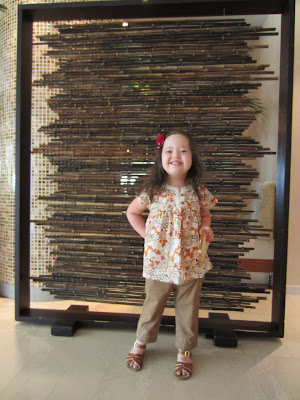 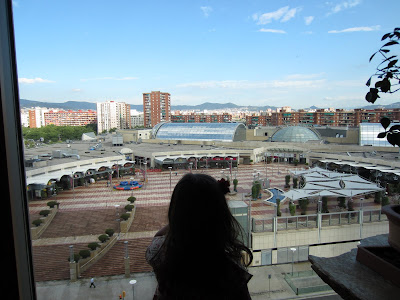 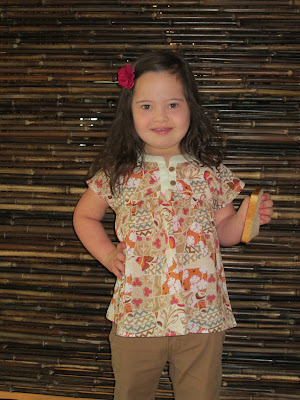 After breakfast, we debated what to do next, deciding finally on going to La Rambla, the long street with restaurants, street performers, etc. We took the local bus there – number 41 – which picks up across the street from our hotel. After 20 minutes or so we were there, and started walking. We stopped at the first gelato stand and got 2 cones – Lilly picked out mint chocolate chip (which is my favorite, and she’s never ordered that before) and she liked it for a couple minutes before being done. She’s not a huge ice cream/gelato fan – she appreciates it but doesn’t need a lot. I inherited the cone after her, and we threw most of it away – we were still full from breakfast. We walked further down, and found a little park on a side street, where Lilly played for awhile. It was the first park we’ve seen in Barcelona – the city is unlike New York City or Auckland, where there are parks everywhere we turn, almost. The park was tiny but perfect for Lilly, and it was nice for her to run around. We continued walking, past a big statue of Christopher Columbus, and to the waterfront. We made a left and walked along the water for a long time – past Port Veill (sp?) with tons of sail boats, and through Barcelonetta, with the boardwalk and beach. Lilly was drifting off in her stroller, so we got in a cab for about $7 Euro ride back to the hotel.

When we got upstairs, it was 2pm or so, and we debated what to do next – nap or beach – and we went with a nap for all. We fell asleep easily, and Lilly got a good rest which makes me happy. In the hotel, she took naps with us each day in the king bed, but slept on the pull out couch in the living room at night – she liked it a lot, she thought of it as “her” room.

I didn’t sleep long, but Lilly and Jon slept until 4:30. I gave Lilly a good bath with a hair wash (I knew it would be the last time with a big tub; luckily all Disney Cruise rooms have bathtubs unlike many other ships, but they’re not big tubs or big bathrooms). Lilly happily played with her “everybody’s” – her little plastic Elmo, Cinderella, Stepsisters, Mickey Mouse, and Belle – and had them reenact the scene “I know I’m gonna like it here” from Annie.

By 5:30 we were all dressed and ready to go to our nighttime plans. We debated taking the Metro subway or a taxi, and decided on taxi for convenience, as we’d have to transfer Metro stops and public transportation in a foreign country in a different language can be a little confusing – especially with dinner reservations.

The taxi was quick and convenient and not too expensive – 20 minutes and less than $20 Euro – to go to up the Monjuic mountain (if I’m wrong about any of the geography or history, my apologies – we didn’t research the Barcelona portion too well beforehand) to Pablo Espanya (sp?). It is a beautiful area high above the city, with great views, and it was like entering a castle or something. The pamphlet we got when we arrived said this area was built in the early 1900’s, taking architectural details and history from different regions of Spain to build this area. It was gorgeous – I think normally you have to pay to get in, but we had reservations at Tablao de Carmen (sp?) so it was included. We walked around for awhile, did a few wine tastings, bought a bottle of red for the ship (we had bought two bottles of wine at that mall “Target” style store the day before for less than $3 Euro per bottle, so this was a splurge at $13 Euro – it’s nice that we can bring wine aboard the ship. We brought a corkscrew from home and can open the bottle in our room and then bring a glass of wine to drink anywhere on the ship to avoid the more expensive surcharges that wine in a bar would cost, or the corking fee of the dining room if we brought the entire bottle to dinner).

Lilly ate a ton of bread pieces while we tasted wine, and there was even some goat and sheep cheese for us to sample. Jon also found chocolate samples for Lilly. She sat underneath an orange tree and a lime tree and then tried jumping up to get an orange. It was a really nice place to spend some time. 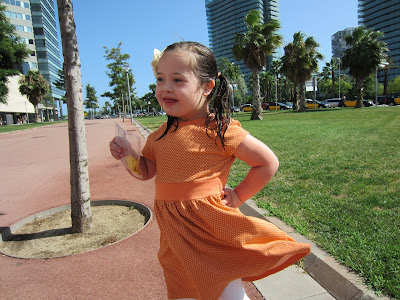 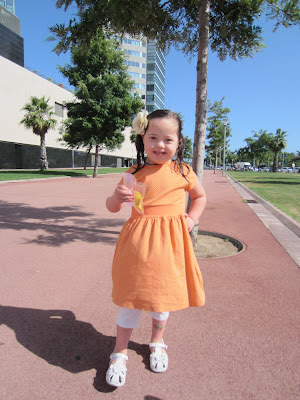 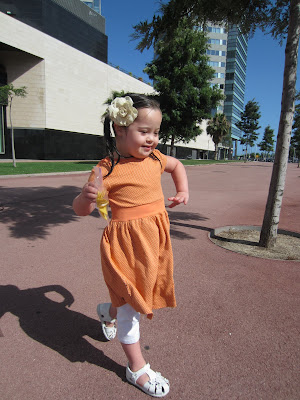 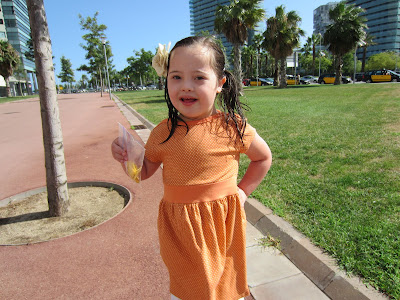 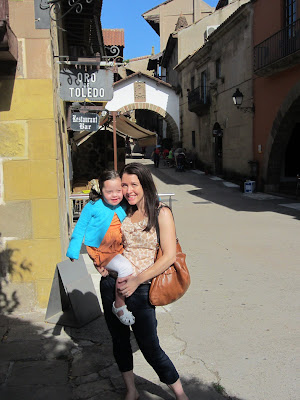 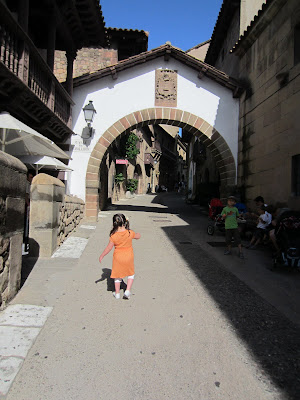 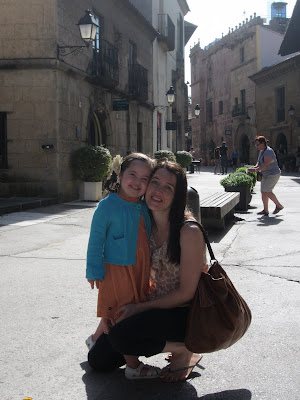 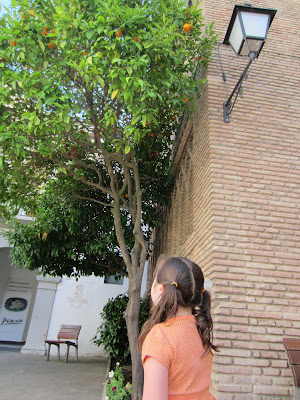 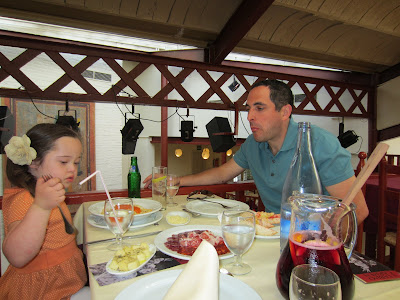 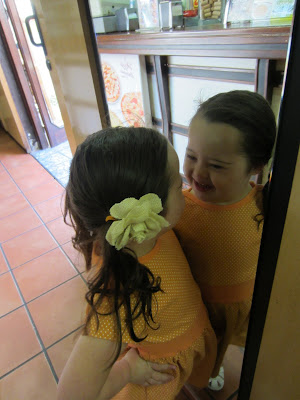 Finally at 6:45 it was time for dinner. The restaurant has Flamenco dancing – which apparently is touristy especially in this region, because it’s not from Barcelona but from Madrid or somewhere else perhaps, but when you’re a tourist, it’s time to do touristy things.

My expectations for the event weren’t high, but the whole experience turned out to be amazing. We could choose beforehand either to do dinner for 69 euros, tapas for 45 euros or a drink for 30 euro’s - and all included the show. Lilly’s was a smaller price, I can’t remember what it was. At 6:45 we sat down for Tapas – we didn’t need a huge dinner. The “tapas” people were put on the second floor, while those eating dinner were on the first floor – but it was a small place, so it wasn’t hard to see wherever you were. Immediately our attentive server appeared and gave us a huge pitcher of Sangria – included with the meal (we could have chosen wine, but we can always have wine – when else can you have Sangria in Spain?). Lilly could choose a soft drink, which she doesn’t drink, but I ordered her a sprite which I knew I could drink (I thought a diet coke for a 5 year old would be weird). The Sangria was delicious, and did I mention huge? – and hit the spot. A couple minutes later a big plate of penne pasta with a pink tomato cream sauce arrived for Lilly, and she was in heaven; and we were served bread, a big plate of various meats, and cheese. We thought this was it, and were happy and satisfied. Lilly loved her pasta, it was the best meal of the trip. A little while later, a few more plates arrived – roasted green peppers and potatoes bravas – and we got even happier (or perhaps it was the Sangria). Then, 15 minutes later, as Lilly was winding down on her pasta, the server came back with a huge plate of 2 big pieces of breaded chicken and French fries. We cut up Lilly’s chicken and she ate every bite of it, dipping it into ketchup. Huge meal for her, but delicious – and after the traveling and everything, it was nice to see her relax and eat well. We also were served a plate of calamari, which Jon enjoyed.

The dancing began, with 5 people sitting, singing and playing guitars, and 4 dancers came out, one at a time, and danced for about 10 minutes each. Then at the end they all came back and did a finale together. The music was beautiful; the dancing great, the whole show was such a good experience. Lilly loved it, although she thought it was loud because of the way their shoes banged against the wood floor when they danced. But it was definitely an amazing experience that I would recommend, between the food and the show – a perfect night for Lilly.

Halfway through the hour long dancing show, our waiter brought Lilly chocolate ice cream with shipped cream, a chocolate dessert for Jon, and crème brulee for me. He asked if we wanted coffee – Jon said an espresso, and I said coffee. He came back 10 minutes later with 2 espresso’s – apparently that’s all they have. I tried a plain espresso (with sugar) for the first time ever and it was fine, but then I stayed up all night! 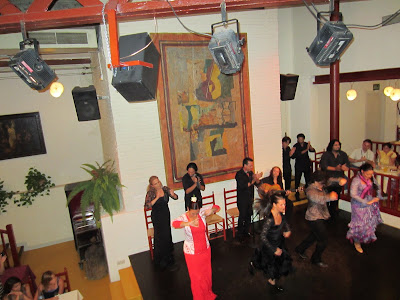 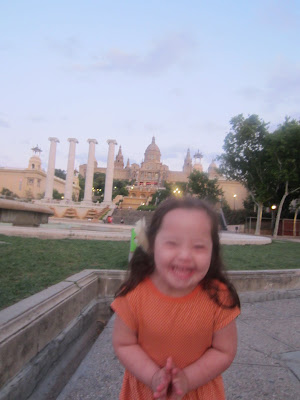 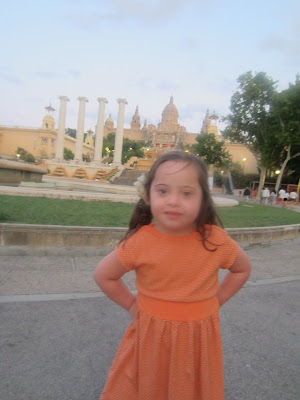 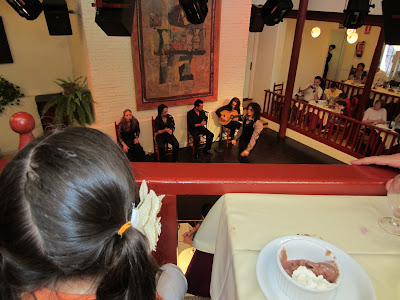 Just one downside though – on the way to Pablo Espanol we lost Lilly’s camera – or maybe it was pickpocketed? Thank goodness it wasn’t the new one I just got, but it was still sad because Lilly loves her camera and actually takes pretty good pictures on it. Not sure if we can get her a cheap/disposable one to replace it or not, or if I’ll just let her use mine. She definitely enjoyed taking pictures of the flamenco dancers with my camera at the show, and I’d like to give her the opportunity to take pictures of whatever she wants on the trip, to memorialize it from her viewpoint.

After dinner, at about 9 pm, we walked around the area outside Pablo Espanol, a beautiful area, and then walked to the Magic Fountain which was not running this particular night, but there was a building behind it that was beautiful that Lilly called a castle. We took tons of pictures, and came back to the hotel.

Jon went for a run when we got back, and we organized our clothes and bags. Jon and Lilly went to sleep around midnight, and thanks to my espresso, I fell asleep around 2 am. 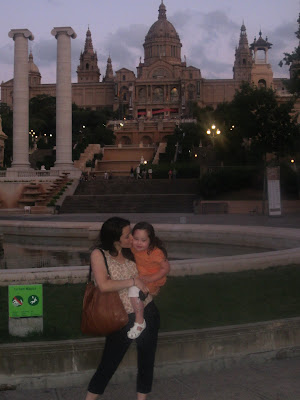 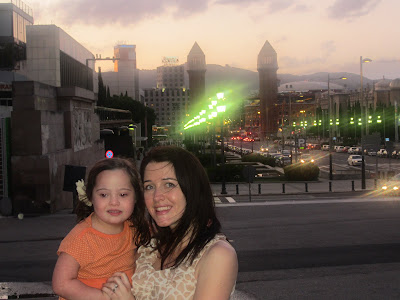 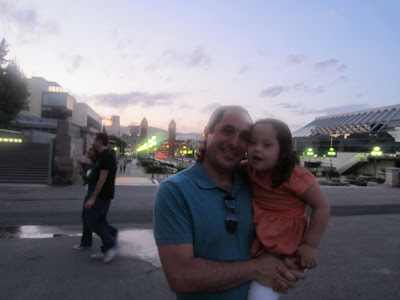 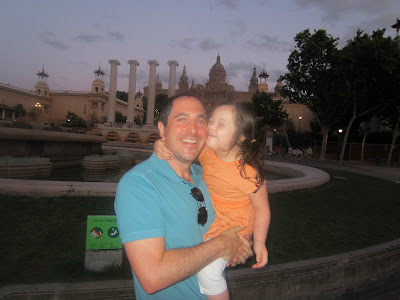 (Editor's note: the pics are out of order a little, uploading issue and too lazy to fix!)
Posted by Cathleen at 6:41 AM

Thank you for letting me live vicariously through your amazing trip! Loved, loved, loved the descriptions of the food (can you tell it's almost lunchtime for me now?). So sorry about Lilly's camera. :-(

Oops, that was me...hit enter too soon.