The end of November

The last half of November was crazy. Jon's schedule is always nuts, of course - being gone from 4:30 am until after 10 pm is not unusual these days, unfortunately, but he loves what he does and he's building a good practice - and reputation - so it is what it is. My work was busy as well in October and November (it's based on publishing schedules, so with my new temp status, some months are busy for me and some months I can completely take off). Plus, Jon was traveling for work right around the time that Lilly got croup. And bronchitis. And pneumonia. Mixed with her asthma. I was with her 24/7 - while still getting work done - making sure she was taking a dozen medications, giving her breathing treatments, etc. And we were in a minor car accident, randomly rear ended at a stopped light. And then Jon came home, just in time for Lilly to go in the hospital, needing oxygen for 3 days. We came home the Tuesday 2 days before Thanksgiving, and I spent Wednesday at home with her all day while Jon worked. As he put her to bed that evening, I suddenly had excruciating pain and we quickly dropped her off at the neighbor's house at 10 at night before going to the ER. Turns out, I had a kidney stone - and yes, they are more painful than labor - and Lilly was a 9 lb 8.4 oz baby! We were released from the hospital at 6 am Thanksgiving morning, in time to be exhausted without sleep, Lilly still recovering from her illnesses, and canceled our Thanksgiving plans in order to rest. Jon hit Whole Foods at 3 pm on Thanksgiving afternoon and luckily they were stocked with everything you'd need for a full traditional meal, ready to reheat. And luckily, Lilly and I had decorated the house for Thanksgiving so it was actually nice to be home, although it wasn't our original plans. 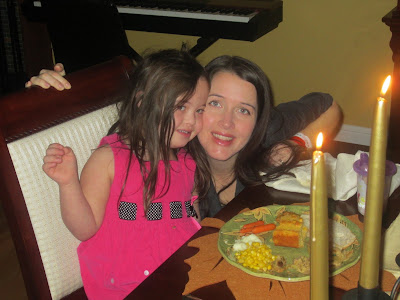 Two sickies - you can still see my hospital bracelets on from the night before. 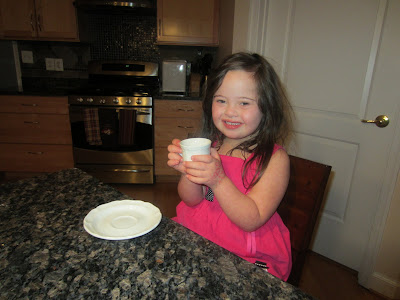 Lulu and a fancy Thanksgiving cup of milk. 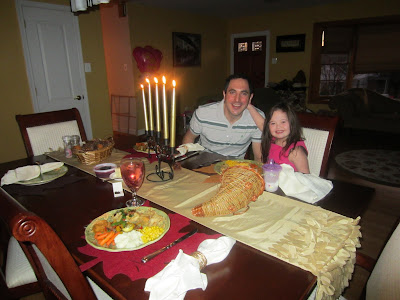 Let me add, that even with Lilly totally under the weather, she was amazing. She hated the meds but was such a big girl about taking them. She was in great moods the whole time, although exhausted and weak and had a fever of 103 for 3 of the days. She hated the ER experience, hated the IV and everything, but once we settled in at the hospital she was such a good girl; she knows how to make the best of every situation. All her friends at school made her cards and video messages (she has an amazing teacher).

So that's where we were the last half of November. December gets much, much better as you'll see in the next post...
Posted by Cathleen at 11:00 AM