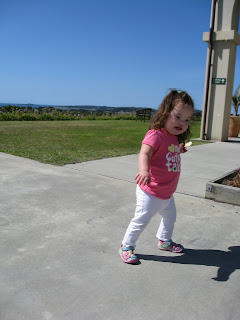 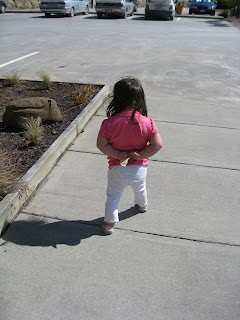 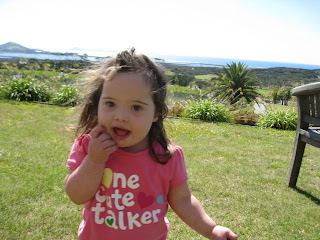 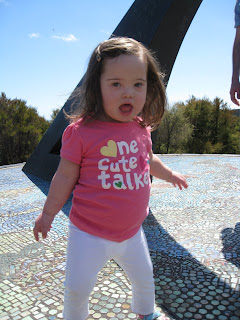 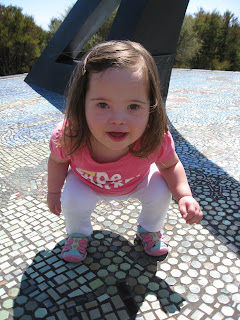 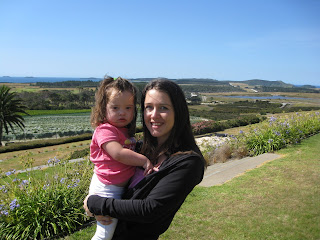 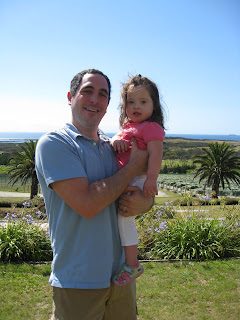 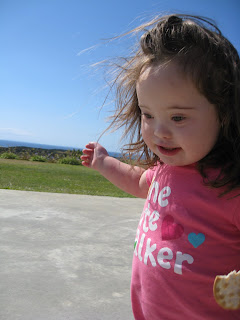 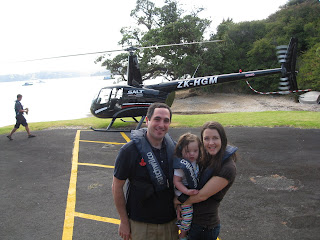 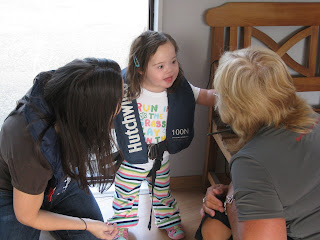 The Hole in the Rock (from helicopter) 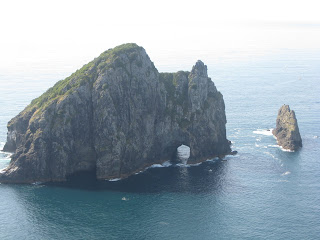 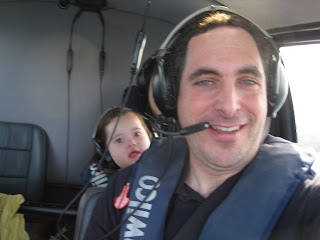 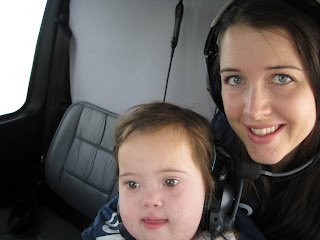 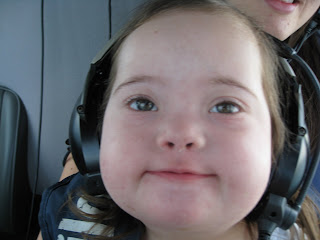 We headed out of town this past weekend for an impromptu trip to the Bay of Islands. (Because, clearly our 10 day trip to the US was not enough traveling for me. And also, because the travel website wotif.com is way too exciting and I couldn't help researching every hotel/motel in the North Island and planning an immediate trip.)
I settled on the Bay of Islands, because of its close proximity (3 hours drive North, although it took 5 hours on the way up because of traffic). We stayed at Admirals View Lodge, which looked like an American-style motel on the outside, but was only a few years old, spotless, and had a kitchenette. It was on the edge of the town of Paihia, the biggest town in the Bay of Islands (there are also Russell and Kerikeri), and Paihia was packed this weekend - the town is just filled with hotels and motels and lodges, and this particular weekend most had no vacancy.
By our first night, Lilly (and her parents) were on a big tour bus headed to the Treaty of Waitangi Grounds for its evening show. And as the bus stopped at each hotel and motel and hostel, we realized that she was the only child on the bus. In fact, the next-youngest people on the bus were me and Jon. But we weren't intimidated: this little lady is well-behaved and enjoys all entertainment. Aside from a little trepidation on Lilly's part by the loud noises and "fighting" outside before the real show started inside (i.e., Lilly shouting No! No! and holding on to us tightly), she sat excitedly on our laps in the front row and proceeded to clap enthusiastically at the end of each song (she actually initiated the clapping for the audience on most songs!), and dance throughout the performances. An hour and a half later, at about 9:30 pm, she finally fell asleep, missing the last two songs - but she had a wonderful time.
The weekend also included a bus tour of Russell, which was the first town inhabited by the British about 200 years ago, and it was also the first capital of New Zealand for a short time. It also has fame for being filled with brothels back then. Now it's a sleepy little town that you access via ferry, with the oldest church in New Zealand, and a very cute place to visit. As we got on our 1 hour bus tour, it hit us again: this time, we were the only people on the but under the age of 60. We crossed our fingers that Lilly would behave, and actually enjoy the tour, and of course, she did. At one point we arrived at the highest point of the city to take pictures, and she was so precious, dancing around. It was a tour worth taking.
During the afternoon, Lilly decided she was not in a napping mood, so we drove North, planning to visit Kerikeri, about 30 minutes away. However, when we drove into the town, Lilly was sound asleep, so aside from making a short stop at a chocolate factory, we kept on driving North. We ended up in the Karikari Peninsula, which is the most North you can get without driving onto 90 Mile Beach (which is about 60 miles actually, and is unpaved beach that is said to be dangerous to drive on with a regular car). Anyways, we drove and drove, with nothing in sight, and finally came upon a vineyard. We stopped for a tasting, and then drove the 2 hours back to Paihia. It was dinnertime, and Lilly was sick of being in the car, and we decided on a restaurant on the water that boasted an huge aquarium. We walked up hoping that they'd have room at the last minute at 7 pm, and they not only sat us immediately, but Lilly was sitting right in front of the aquarium - she was thrilled. It was an enjoyable dinner out, as Lilly's chicken and french fries came out quickly, as did the ice cream sunday she ordered later, and there was live entertainment, and Lilly made sure to dance in front of the guy singing before we left.
On our way out of town the next morning, we decided to... get on a helicopter and do a tour of the Bay of Islands!!! Jon had wanted to the whole time, and we had decided against doing the 4 hour boat tour (didn't think Lilly would be happy for that long!). The helicopter tour was just 20 minutes, and Lilly was free. So, I told Lilly we were going in a helicopter "just like Annie" (when Annie goes to meet President Roosevelt). We all had to put on lifejackets (since we were flying over the water), and Lilly gladly put her arms out to have them suit her up. It was unreal walking out to the helicopter, with the top thingie (what's it called?) swirling above us, and sitting inside (it was just a 4-seater, so it was a private tour!), and putting our headphones on (including Lilly!). It was very exciting, and a great end to the weekend.
Posted by Cathleen at 10:27 AM

Wow! How amazing! You are an awesome trip planner - teach me, please!!! The pictures are fabulous. I cannot get enough of that beautiful girl. I was just reading about how fun it can be to look at your friend's child and see your friend reflected back at you. I do that so often with Lilly pictures, whether it is her energy and enthusiasm or just her beautiful face! It pulls me back to us at 11 again!

I loved hearing about your trip to Atlanta. I am not as good a traveler as Lilly (or you!). I'm glad you got to see familiar people and sights. I love your family :)

So jealous. You will definitely miss all the cool experiences offered by RFC. And as always, the photos of the princess are adorable.

How great, great pics, looks beautiful as do you all!