Sometimes it's hard for me to write. Because most of the time I want to write about how Lilly is so amazing. About how she is magic. But it's somewhat redundant, I think. How many posts can be about Lilly's amazingness? And how do I put into words what I experience every day? The feeling like my heart will almost burst when I watch her do or say the absolute cutest things. The way she touches my soul with a certain look or when she says "Love you too, mommy." The way she appreciates the world in ways that I never knew possible.

Of course, nobody's perfect. Our Sunday started with Lilly being kind of obstinate. She didn't want to do what we asked. She didn't want to eat breakfast, sit at the table, get dressed. "Lilly, do you want to see Santa? Do you want to see Mamma Mia?" "No!" she would reply. It actually wasn't all that bad; she just had her opinion on what we were doing for the day, and it most definitely involved Elmo's Christmas and did not involve doing anything else. But instead we turned off the TV, ate a bowl of grapes, danced along to Christmas music, and got ready for our day.

Which included Santa at Bloomingdales. We walked the 13 blocks over to the store and took the elevator up to the 8th floor to see Santa. He started seeing guests at 11 am. We got there are 11:10. We waited an hour and a half to see him. It was insane. The line wasn't super long; but he was taking forever with each family! Which was nice, but not for the people waiting! Lilly was going crazy waiting, so she ran laps around the department store. Literally.

There was a family in front of us with a little girl, maybe age 3 or so, and a newborn (10 days old!). They were patiently waiting along with everyone else; the girl wandered around with her mom or dad just like Lilly did, while the other parent waited in line. Finally, it was their turn. The mom and dad picked up the little baby and went over to Santa. Meanwhile, little girl freaked out. Threw herself down on the floor. Cried and sulked and was mad and was a complete mess. She was so well behaved in line; but I guess a 90 minute wait can do that to you. They never did end up getting a good picture with Santa. Sad!

So then it was Lilly's turn. Witnessing the little angel who turned into a mess right before my eyes, we had no idea how Lilly would do. And of course, she likes "characters" and does well interacting with princesses, etc, but going over to Santa and sitting on his lap? No idea how this might turn out... But, here you go: 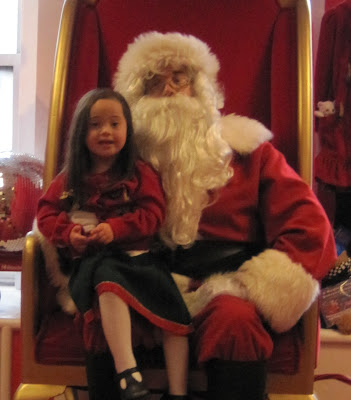 She was appropriately happy and excited, thank goodness. She knew it was important to suck up - I mean, be respectful - to Santa. She sat on his lap, told him what she wanted for Christmas: "Elmo" (not surprised, but the whole time she was in line she kept saying she wanted "a toy"). She let us get a ton of pictures, and gave good smiles. (The smiles are actually fake, but they look better than her alternate "cheese" smiles because she practices smiling good fake smiles because of Glee.) 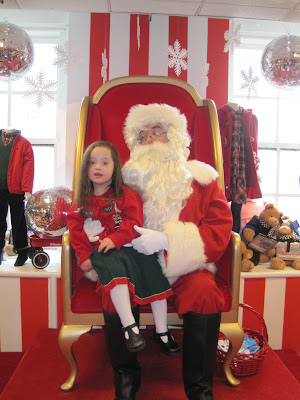 So Santa? Success. Next on the agenda, a quick lunch. McDonald's. Another clear success. A chicken nugget Happy Meal for Lilly, a chicken salad for Jon, and french fries and a milkshake for me.


Then we walked 20 minutes across town to Broadway and 51st to... Mamma Mia! Along the way, we passed this and snapped a quick shot: 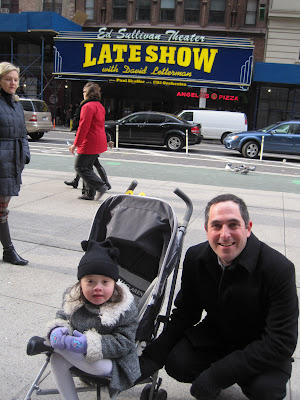 Lilly was THRILLED when she saw the Mamma Mia sign. My girl is by now quite familiar with Broadway and shows. She's loved Lion King, Mary Poppins, and Radio City Christmas Spectacular. She's always loved entertainment - live music, the circus, Disney on Ice, and Elmo Live - but Broadway has stretched her appreciation to new limits.
And she loves the movie Mamma Mia; she's memorized it. Loves Meryl Streep, loves Amanda Seyfried, loves the music and dancing. Here she is with huge anticipation, waiting for the show to start: 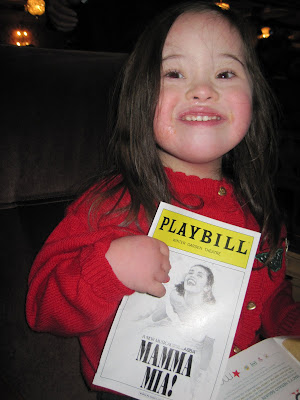 And it didn't disappoint. And neither did Lilly.
Here is the interesting Mamma Mia fact: Jon and I saw the play in Vegas 7 years ago. I loved the music, and thought the play was good. Not amazing, not the best thing ever, but good. Jon doesn't even remember seeing it, which shows how impressionable it was on him. Then two years ago, we saw the movie in the theatre in New Zealand. Again, we thought it was good but weren't blown away. (Part of the problem was the fact that the Kiwi's sitting next to us had a slightly different humour than we did: at parts when we were serious, they were cracking up - and vice versa.) But then we bought the movie and Lilly watched it on dvd for the first time: and she fell in love. And started singing Abba. And dancing like a... dancing queen, obviously. And this was when she was just 2 years old. And ever since, it's been in her movie rotation, of good movies that she gets so excited to see.
And then today, Jon and I saw the play, again. Lilly's first time seeing it. And we loved it. It was such an incredible experience. Watching Lilly's face light up. Listening to her sing along. Seeing her laugh at jokes, whether or not they were kid-appropriate. Hearing her add her own little commentary occasionally - at one point she said something funny loudly right after an actor did something - and the whole theater laughed at what Lilly said.
Lilly truly comes alive at times like these. Not that she doesn't in "ordinary" life but - you can see this is her passion. These are the times we realize how incredible her mind is; how deep is her joy for life. Lilly's little 5 year old friend came along with us. She liked it, but wasn't blown away like Lilly was. 20 minutes from the end, she was asking when it would be over. She was ready to go. Meanwhile, Lilly never wanted it to end. The people around us, even, were half watching Lilly's reactions to the show, because her expressions were priceless.
I'm not exaggerating. And I can't adequately describe Lilly's magic; but I've certainly tried to paint her portrait. Let's just say, while budget cuts are being made in our household, entertainment must continue to be a priority for us.

Lilly grudgingly left the theater 20 minutes after the show was over, promising the empty stage that she'd see it later and that she loved it.
As all goes well in Lilly's World, of course the next thing we encounter when walking down the street to catch a taxi is this: 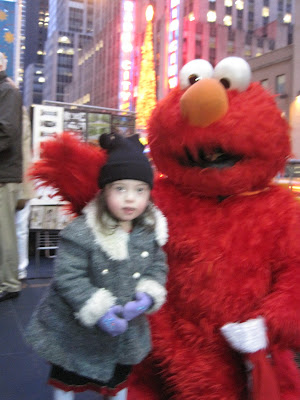 Random Elmo? On a street corner? And we weren't even on "Sesame Street"! He was just a little creepy, but friendly enough, and happily took a picture with my little eager princess. Then we put two bucks in his stocking.
Then, still looking for cab's (it's crazy nuts in this area, complete tourist trap), we went down a street and stumbled upon Rockefeller Center. I saw the huge tree ahead, and told Lilly: "Look!
Can you stand here and take a picture in front of the big tree?"
Well, my Lilly gives all trees equal opportunity, so instead of posing in front of the famous tree, she finds a bush with lights and says "Cheese." 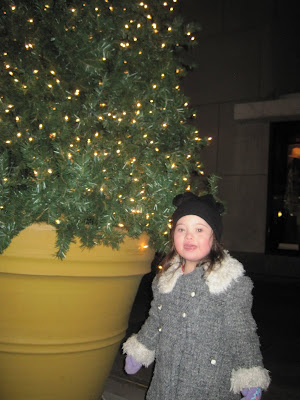 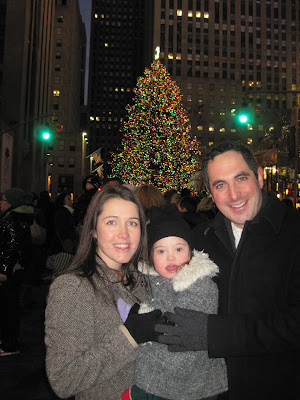 After this, we jumped in a cab and went down to Lombardi's, NY's first original pizza. It's like 100 years old or so, and we've wanted to try it for awhile. It was definitely good, but not amazing - I'm glad we tried it but probably wouldn't go all the way downtown again. But, we have lots of great pizza in our neighborhood as well. However I am definitely a fan of the history of pizza, so it was an important occasion.
We ended the day with a subway ride home. When we got in the Spring Street subway station, two guys were playing a guitar and a set of key's (literally) and singing (and asking for money). Lilly was dancing up a storm, and I gave Lilly 4 quarters and she put them in their box. During the next few minutes' wait for the train to come, they played "My girl" for Lilly.
The day ended with Lilly taking a bath, and crashing in her bed - deep sleep within minutes. Love watching my girl enjoy life to the fullest!
Posted by Cathleen at 7:25 PM

Oh my goodness, apart from the part about Mama Mia and the other musicals she's seen (we've only taken Sammi to one show, Nickleodeon Live, but I'm sure she'd love others if we tried her), I totally could have written this post, too. LOL
"I love you, too, Mommy" is the BEST thing EVER to hear, btw.
Oh, and the creepy random Elmo totally made me laugh...
(I owe you an e-mail...coming later...)

nice to meet your adorable lilly... have a merry christmas :-)