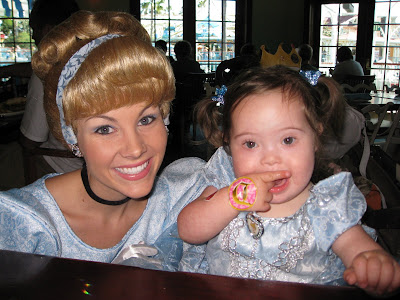 It all started when my sister announced that she is taking her 19 month old daughter to Disney World this month. I was SO excited for my niece - it will be her first visit. And I am thrilled for my sister, who's been a million times, and her husband, who hasn't been since childhood, who will get to see Disney through their daughter's eyes. There is absolutely nothing like it.
My family grew up on Disney, and I converted Jon 5 years ago. Lilly went on her first trip right after her first birthday (a few weeks before she had her tonsils out, and I was having guilt about booking the surgery, so with a few days notice - we were off to Disney!). Lilly laughed and danced the entire trip. It was probably the most fun that I had had with her up until that point. We took her to Disneyland on a day-trip at 15 months, and back to Disney World with my parents and niece and nephew when Lilly was 22 months old. That Disney trip was a guilt-about-soon-moving-out-of-the-country-so-we-have-to-experience-it-now-before-we-leave trip. Another successful venture. I don't know why we kidded ourselves and thought 4 days would be enough; but all of a sudden I was calling work to ask for more time off, and making reservations on the day we were leaving and letting them know we were staying 3 more days! So worth it. The memories will last forever.
Our last trip was to Disneyland, on the way out of the country for our big move to Auckland. This was not about Lilly this time (well the trip was, but the motivation wasn't). This was booked as a bribe-Cathleen-to-get-on-the-flight-to-NZ-by-letting-her-go-to-Disneyland-first trip. Once Jon got me on the flight from Charlottesville to LA (for the sole purpose in my head to go to Disney), then I'd have to be a grown up and get on the next flight a few days later to NZ. And it worked. And Lilly had another incredible experience. While I do prefer Disney World (for the record), I fell in love with Disneyland on this trip as well. Even California Adventures, which has gotten less-than-amazing reviews. (The best part about Ca.Adv: no lines and lots for Lilly to do!)
So there is my Disney background, abbreviated of course, as I could go on all day about every trip that I've ever been on there, and mine and Lilly's (and Jon's) reactions to every single ride, not to mention the restaurant experiences... But I'll stop there. This really started, where I began, with my 19 month old niece going to Disney World. And I was so excited, as I mentioned. They booked the Beach Club, which is one of the few hotels I haven't stayed in yet, and where Jon and I have talked about staying on our next trip. Great location and great pool. I got even more excited for them (and slightly envious!). I came up with Lilly's guide to Disney for my niece, and even went so far as getting dining reservations for my sister's family (without her permission, originally! but I told her after and she said she was happy). But all this Disney talk was getting me a little down, because we're on the other side of the world, while my sister (and millions of other people) get to go to the happiest place on earth. But, this is not the source of the real Disney Blues.
Jon and I had talked about taking Lilly when we get back to the US in June 2009, so I started researching for our next trip. Disney's 2009 rates were not out yet, so at first I lived vicariously through my sister's planning. And then tonite - I checked again and the rates are out. I started comparing again this hotel against that, do we go for 4 days or 7, should we tie a Disney cruise into it? I started thinking about what restaurant I wanted to eat in on which night 10 months from now and what food I would order to eat. And do we go to a different restaurant that we've never been for a new experience, or one that Lilly's been to and loved? Yes, obsessive, I know. But then it hit me - Once we go on the trip in June 2009, it will be over. And it will be at least another year before another Disney vacation!
So there you have it. The Disney Blues. I am so obsessed with Disney, I can't live on my memories from 2 months ago when we took Lilly to Disneyland; I can't merely look forward to our future vacation 10 months from now. Instead, I have to be sad that our trip following the next trip will be 2 years away from now. I'm already disappointed that I have to wait so long before Lilly's next-after-next trip to Disney. Because after next June 2009, it will be so long again until the next trip. :( And for the trip in 2010, do we go in the winter or the summer? What hotel do we pick? Which restaurant do we want to eat in at least two years from now?!
And Lilly will be 4 by then, I can't even imagine her that big!
And actually, while I was very sad a few minutes ago, the thought of Lilly being 4 and at Disney World, and being able to go on more rides, and attend Alice's Teaparty, and be even more interactive with the Princesses... I'm starting to get excited again! So, I will live vicariously through my sister's trip this week, start planning my trip for 2009, and have the fortune of starting to think ahead to a 2010 adventure! This could get exciting. Maybe I should get to bed before it gets too overwhelming again.
(By the way - I'm in Australia. Pining away for Disney World. I need help. But Sydney is gorgeous and I'll write about our adventures here tomorrow.)
Posted by Cathleen at 6:27 AM

Cath- We will think of you every step of the way! Thanks for all of your help. Jenn, Brian & Cassie

I will definitely take tones of photos there!!!