I still haven't taken any amazing pictures lately, or come up with any amazing stories to tell, but we should have some good things to post next week. We're going to Australia for the weekend (you know, the usual); we leave tomorrow. It's the first time we're leaving Auckland at all since we got here (we haven't done any sightseeing outside this city), so it's exciting to get away. And exhausting - packing all the stuff a two year old needs (like a portable booster seat, as most restaurants here don't have highchairs, and her "potty" that sits on top of a regular toilet), and mentally preparing for the rountrip flight and a few days in a hotel, plus all the meals out. I'll try to get some pictures up at the end of the weekend; but in the meantime, here are some pictures from the past couple weeks.

Here is a picture of our garage, and the vines that fell down in the intense wind and rain last week. I was blocked in. I got the portable DVD player, set it up in the car, strapped Lilly in her carseat, and hung from the vines til they fell off (at least on one side), so I could back out. 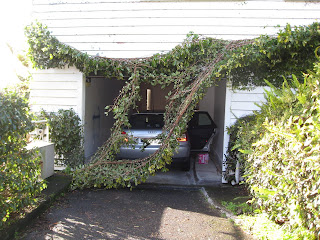 Lilly's favorite thing about New Zealand: the little rides outside the grocery stores and in the malls. Here's her favorite one (but it wasn't plugged in that day, so she just sat on it with her pals). 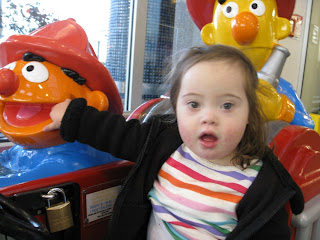 Here's Lilly with a monkey in a banana car. This one did work (although its $2 per ride!), so the picture is fuzzy as it's moving. She initially refused to sit next to that monkey, he was a little scary. 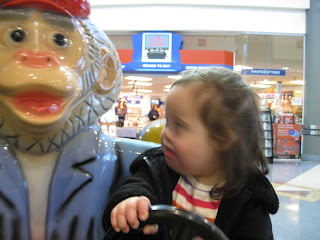 Lilly and Mommy on mommy's birthday two weeks ago. We're facing our house, and behind us is the driveway that goes up to the street, and my car. 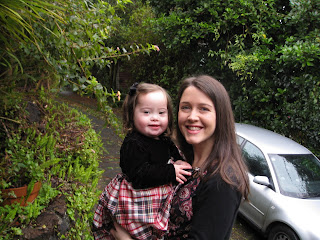