We spent the weekend in Sydney, and the city was beautiful. More than appreciating just the city itself, Jon and I needed 1) a change of pace; and 2) familiar faces. We got both - we stayed at Swissotel, a beautiful luxury hotel in the middle of everything, with soft down comforters and beds (and even working heat!), and the weather couldn't have been better, for the "winter" on this side of the world (a little cold, but sunny). And, Jon's parents joined us there, and then we all flew to Auckland yesterday. Lilly loves Jon's parents, and with no preparation, learned how to sign "grandma" and "grandpa" right when we saw them for the first time in Sydney. Jon's mom loved the city most of all of us (although we all agreed it was charming).

Lilly was a good sport about all the sightseeing, although she failed to hide her boredom a couple times when she fell asleep in the stroller. We went to the aquarium, the zoo, the wildlife adventure (or something), the Sydney Tower, Darling Harbour, and best of all (in Lilly's eyes) there was a carousel. She loved it the first time, and the second time was a little more fidgety (during the ride Jon had to move her from horse to horse to keep her happy, she probably sat on about 15 horses!).

Sydney is a 3 hour flight from Auckland, and Lilly was great on the flight there and back. We didn't even need to take out the DVD player on the plane (although it was watched plenty in the hotel). The hard part about international travel is the whole customs side of it - the more lines we have to wait on with Lilly, the more potential for her to have a breakdown. And, when you arrive internationally in each city, you're not allowed to get your stroller until you get your luggage - which means carrying a heavy little girl through much of the airport. So there was a lot of potential for things to go downhill, but luckily, Lilly was amazing. So, on with the pictures:

Lilly, Jon & I at the Auckland zoo with the Sydney skyline behind us. 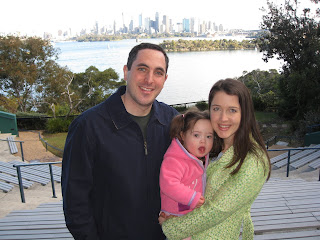 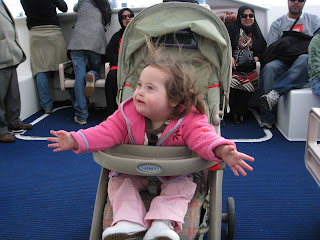 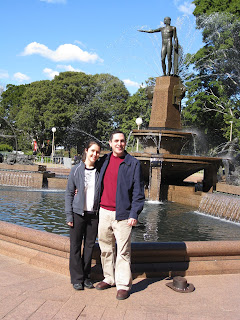 Lilly looking at a smaller part of the statue. 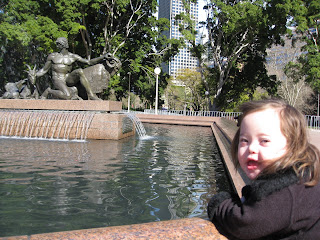 Lilly on a bench. (She's wearing Julianne's hand me down jacket.) 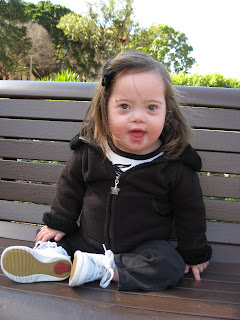 Some koala's at the zoo. The top one has it's baby on its lap. 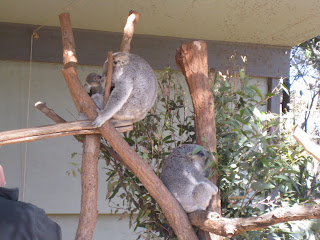 A kangaroo. (The animal pictures are dedicated to DB.) 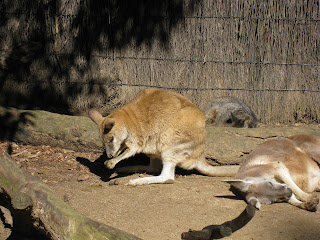 Grandpa Ron, Grandma Myra, Jon, Lilly, and me with the skyline in the background. 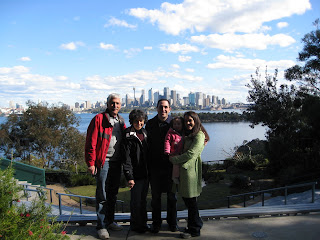