From the day we arrived in New Zealand, I was worried about getting around. Driving in new cities always makes me nervous, but driving on the wrong side of the road in the wrong side of the car, while dealing with my little angel (who turns into a demanding little devil in the car) in the backseat, absolutely terrified me. Not to mention, some of the driving laws are different here, and the roads are filled with roundabouts, which are intersections without lights that cars can come at you from any direction. Plus, I had psyched myself out generally by the fact that we’re in a new country – everything here felt so intimidating.

Yet thank goodness I had the assistance of Tom to get me through the hard times. Actually, TomTom. He is a navigation system who lives in my car (although he sometimes visits Jon’s car) and tells me where to go. He’s actually amazing – for the first few weeks (who am I kidding, it still happens) when we accidentally went the wrong way while driving, he recalculated how to get where we were going from the new road. If I don't know the name of where I want to go, he can suggest places nearby - once he found the closest tire repair shop when I got a flat. He even lets us know if we’re speeding (which made me bond with him even more as we both yelled at Jon).

Tom gave me the confidence to actually leave the house, along with another fellow we call Elmo. We brought the portable dvd player in the car for the first month, to pacify Lilly. So between my two guys, I left the house and went where I needed to go. (Of course, they didn’t help me out once I got inside where I was going, but those panicky situations are for another post.)

We gradually stopped using Elmo in the car as often, and now Lilly usually dances to her favorite music in the CD player in the car. Which is, of course, Disney music – from the Disney movie soundtracks, the Disney theme parks, and also Disney’s Favorite Kids Songs (volumes 1-3). (Are you surprised by that?)

I also slowly weaned myself off of Tom. For the first month I carried him everywhere – even for walks into town. But pretty soon, if I was just going to Lilly’s school or to St. Heliers (the nearby town), I was fine on my own. I even memorized how to get to the grocery store. (Which I can’t show my face at anymore, but that’s a story for another day as well.) But Auckland is pretty big and spread out, so he was always in my car, ready to give assistance.

Which leads us to today. Jon’s on call this weekend, so we’ve just been hanging out all day. Story Time at the library this morning, and then naptime (after the requisite 30 minutes of Annie of course). This afternoon we went to get a kids seat installed on our bikes, but we had to take two cars, since Jon had to go in afterwards. As he drove away, Lilly and I looked at each other – it was only 3 pm, and the day seemed long without him. Luckily it was one of the rare times that I brought Elmo, so I looked at the TomTom and said “Where should we go?” And TomTom didn’t look back at me. In fact, he didn’t turn on at all. His battery was dead.

What do we do next? I didn’t want to go home already, and Lilly was being so good in the backseat. I breathed in deep – TomTom had gotten me this far in our NZ adventures, surely I could remember what he taught me and actually drive somewhere. I decided to drive to the closest mall, which is about 20 minutes away – Pakarunga. The problem is, getting there involves about 20 different turns, including an extreme roundabout in Panmure. Even the locals avoid Panmure when they can. It has about 10 different exits, and is constantly packed. You literally have to pray before you get on this roundabout. And it’s rare that I get off at the right exit, because I’m usually getting off wherever I can to avoid getting hit. But TomTom is always there to lead me no matter where I go. Except today.

So I started driving, and at first it’s not so bad. Then I missed a turn, and had no idea where I was. I kept driving, and nothing looks familiar; I got to a dead end and have to make a guess at another turn. I have visions of driving around for hours, ending up on the South Island. I’m also wondering if there are still maps in this car from the previous owner. Luckily, after driving a little bit, I saw a sign for “Panmure.” I know if I can make it there, it’s not too bad after to get to the mall. I looked in the rear view mirror and Lilly is happily eating an apple and watching a captivating song about “Lightening Bugs” on Sesame Street. In Spanish. So I decided to keep going, I can do this. We arrived at Panmure, and I guessed an exit – and avoided getting hit – and it’s correct. Whew.

Finally we pulled into the parking lot at the mall in Pakarunga. I didn’t necessarily need anything, except both irons that we have are broken. So I bought a replacement at the store Farmers (which is comparable to a Belk), got Lilly a Kids Meal at Burger King, got myself some takeout Japanese (by the way, “to go” food here is called “takeaway”), put her on one of those little Thomas the Train rides that they have at the mall, and an hour later we are back in the car driving home. And I figured out the way, without too much trouble.

I can’t believe I drove today without Tom. I needed him desperately for the first few months, but now I can find a few places on my own. I’m feeling a little more comfortable about doing this. And I’m feeling a lot more confident about my life here in NZ. It just took living it for awhile to figure out how to find my way.


Here are some pictures of Lilly today. She was auditioning for a movie role playing twin sisters who trade places. ;-) 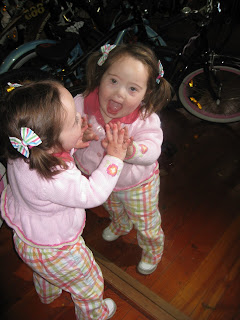 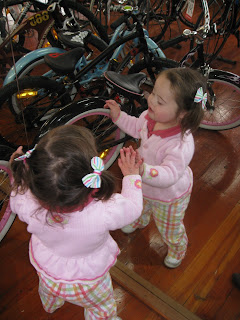 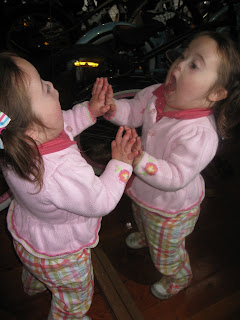 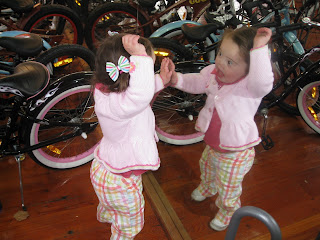 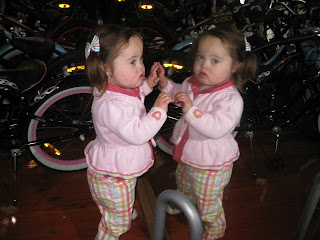 Um...maybe you could charge the battery and send TomTom my way! I'm still a mess behind the wheel. In fact, just today Roger and I were getting in the car and we both went to the wrong sides. He had the keys but I ended up behind the wheel. Argh!