It's been a slow week - no new revelations, or fun outings, or insights. Lilly's been going to school full time, usually around 8:30 to 5, and Jon & I have been busy working - he usually doesn't even get home until 7. We haven't even gone to dinner this week, which is unusual. So, without anything better to say, I thought I'd take a stroll down memory lane and share my favorite memories of Lilly's little life so far. (Can you tell I'm obsessive compulsive by my constant list making?)

1) Dancing baby. From the time Lilly was big enough for me to feel her in my belly during the pregnancy, she was dancing. Nonstop. Not your average little kicking fetus, but full out dancing. I remember playing the game "guess the move" because she was hilarious. I could picture how silly and funny she was even then. What a way to bond with her mom right from the start. The best part was, once she was born, she continued the same dancing. And how cool it was to see those same moves that I guessed at, in her baby and toddler versions as she grew! (Confession: Lilly is such a good dancer that I used some of her moves at Christine's wedding.)

2) 1st Birthday Party. We had everyone who was important to Lilly over at our house for her first birthday party - from her teachers to Jon's parents to our co-workers to her boyfriends. You could just feel the love for her in our house. The highlight: when she sat on the kitchen table while we sang Happy Birthday and she danced and danced and then ate a huge piece of cake. What a ham! And she sat in the middle of the living room, and opened each present one by one, especially loving all the cards, and beaming with pride at all the attention she was getting. (Don't know where she gets it from!) 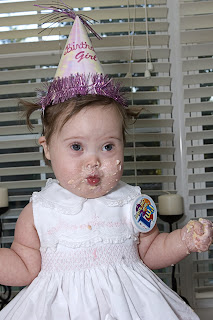 3) Disney World '07. Right after her first birthday, we booked her tonsils and adenoids to come out. The thought of surgery on my little angel terrified me. So, I dealt with it in the only way I could - her first trip to Disneyworld. We planned it 3 days before, and it was during the busiest time of the year, 4th of July. It was the best trip!!! We just stayed 4 days, and the trip started out with Lilly vomiting repeatedly on us on the way down (on the plane, in the bus to the resort... which in turn made me throw up after smelling it for so long!). However, from the second we entered Magic Kingdom the first time, it was like Princess Lilly was home. Absolute highlights of that trip include her riding the "3 person" bicycle around the Boardwalk, her first character breakfast at Crystal Palace with Winnie the Pooh, and especially, hands down, the first time she went on "It's a Small World." Wow that was amazing. She was just a year, and still was very baby-ish, but the minute we stepped on that boat, she started clapping and dancing like I'd never seen before. Oh my goodness, were we all feeling the magic! I remember coming home from that trip, the first time in our lives that we had spent time together as a family for 4 days straight without work or babysitters or anything, and thinking "I could not be more in love with my little girl!" 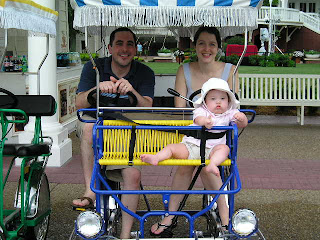 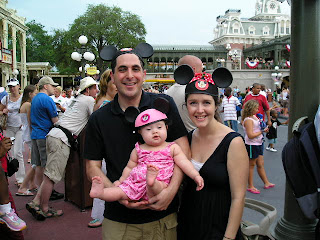 4) School, late summer 07. There was one day when I went to pick up a 1 year old Lilly from school. It was at a time where I was unsure of whether Lilly being in daycare was the right thing for her, whether it was meeting her needs being in a big classroom with a bunch of other kids. And this particular day, I walked into the classroom, and little Lilly, for the first time I had ever seen, was sitting at a little table next to her best friend at the time, Ali, eating snacks with her hands, and drinking her milk out of a sippy cup, and they were laughing together. It was the first time that I ever saw Lilly eating without being helped, and the first time I saw her really bond with another kid in this kind of way. I realized how much school was benefitting my little lady, and was so proud of her accomplishments!
5) Puerto Rico Feb '08. We stayed at the El Conquistador Resort and it was huge and beautiful and Lilly had the best time. (Mommy loved it because there was a casino, but unfortunately she didn't win at all!) It was the first time we really took her to the beach, and it was funny to see her reaction to sand (eating it!). The Best Moment Ever was that there was a boat from the resort to a private island (where the beach was) and I took Lilly on it by myself (Jon was at a meeting) and we sat on top, with Lilly in her own little chair, and the water was so rocky, and Lilly just laughed and laughed like I've never seen her do before - she is a girl who loves motion. There was also a dinner/dancing show at that island one night, and Lilly had the best time dancing and enjoying the music. (Worst part of the trip? A Japanese restaurant experience gone wrong when her first two teeth came in during the meal!) Most ironic part of the trip? When Jon and I (and Lilly, I guess) were gazing at the gorgeous mountainside and ocean and me saying: "Wouldn't it be wonderful to live with such an amazing view someday?!" and Jon saying "Um Cathleen... our house in NZ will be like that." Oh yeah. And it is. But without the Puerto Rico weather, so far. 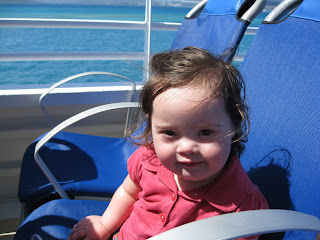 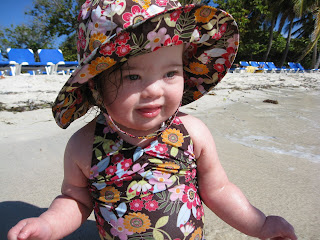 6) Disney World March '08. A week at Disney World with Jon & Lilly, and half the time my parents and niece and nephew were there. So much about this trip was amazing, but if I had to pick one "best" moment it was the Pirate and Princess Party. They closed down Magic Kingdom at night and we got dressed up (Lilly actually just wore a tutu instead of a princess dress, because it was cold, mommy wore a tiara, and daddy wore a pirate t-shirt and bandanna). We started the night with dinner in Cinderella's Castle, which was so cool, and Lilly loved it except when a mouse scared her from behind, then we went on so many rides - and the park had barely anyone in it so it was so much fun. Best night ever. But the entire trip was so much fun. Second best moment of the trip was during Fantasmic at MGM, when Lilly was sound asleep on my shoulder after a hard day at the parks, and the fireworks started - and Lilly literally jumped up clapping, then fell asleep, then woke up two more times clapping enthusiastically in her sleep, before she was up for good and enjoyed the rest of the show. Oh and the Hoop De Doo Review at Fort Wilderness, Lilly enjoyed the show so much, as did her cousins. 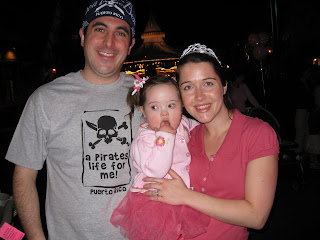 7) Cousin Cassidy's trip to Charlottesville. Jenn & Cassidy came to visit last April and the girls had a blast. Lilly loved having a "little sister" for a few days, and even came up with a "sign" for "Cassidy" - pretending to suck her thumb! The girls did everything together - played together, went swimming, went to a little gym class... it was the best. 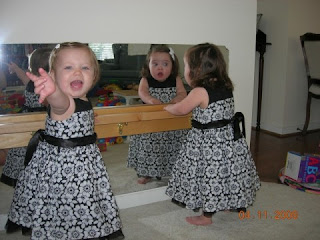 8) Sleeping. In general, it's been wonderful that Lilly is such an amazing sleeper since she was born. (A princess needs her beauty sleep of course.) But specifically, when she was about 6 months old, she used to go to sleep laughing for about a month. We'd put her in the crib, and she'd just beam and laugh and have these euphoric moments (I think she was imagining her future trips to Disney). We got it on video a couple times, and after awhile she stopped. And Jon wants me to add that his best memory of Lilly is now when she goes to sleep, as he lies down on the guest bed next to her crib (a.k.a. "cot" in NZ) and they hold hands as she falls asleep. And she only wants him at bedtime, if he's in the house. (Which is the best thing for mommy, since I can catch up on the blogging and facebooking at night!) 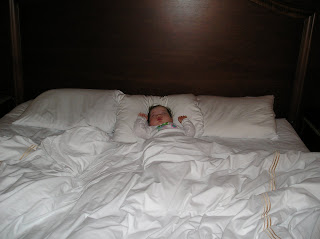 9) Disneyland June '08. On the way out to NZ, we stopped over for 2 nights and stayed on the concierge level of the Grand Californian and it was so much fun. They even had "milk and cookies" at their "storytime" there - where they put blankets and pillows on the floor of the concierge room and told a funny story to the kids. The best Lilly moments were probably the carousel and the tea cups, and of course dressing up like a princess to go to the Princess lunch. And the cutest moments were actually when she wouldn't let us take her off of the rides - she always wanted to keep sitting so she could go on it again! 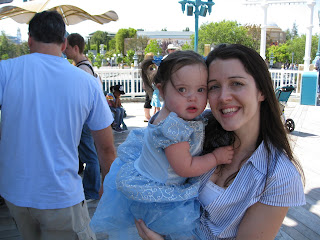 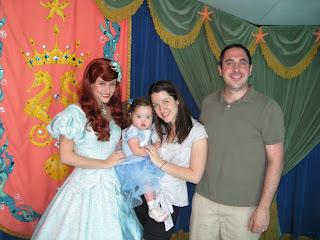 10) High School Musical and Annie. Lilly doesn't just watch a movie, she memorizes what happens next and what dance move they do when. She knows when one song ends, there is a water fountain so she starts "splashing" before it even appears. Or she screams a split second before the girl screams in HSM. It amazes me. And when the music starts, and she stands up next to me and puts her little arms up, wanting to dance in my arms - it is amazing and so much fun. And during the serious songs, when she makes me hold her and she presses her face against mine while we watch. It is the best.
Posted by Cathleen at 12:16 AM

Oh, I'm dying to meet Princess Lilly! And it sounds like you and Jon are the Best Parents Ever for taking her so many wonderful places and exposing her to so many things (especially Annie...). It all makes my ovaries twitch a little. (But only a little!)

Sweet memories, and adorable pictures. I love getting to know Lilly more and more. (And I'm laughing at Robyn and her twitching ovaries right now...)

Lilly is a cute little pumpkin. Your husband is a good sport! Love his expression in the photo with Cinderella. He's a daddy who's into the Disneyland experience. Hope he knows there are many more to come! Cute family.
Lots of love,
Amy Arnaz aka Mrs Desi Arnaz Jr

What a great stroll down memory lane! This will be so much fun to reread 10 years or more from now!