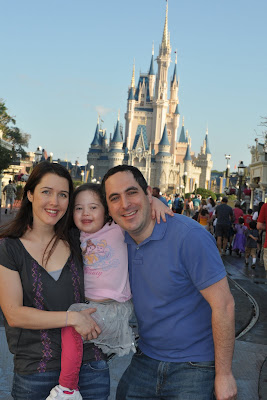 So it was almost 11 on Friday morning. Magic Kingdom was starting to get packed. But we had already accomplished a few rides, a haircut, fastpasses for Splash Mountain and Winnie the Pooh, and a meet and greet with 3 princesses. Now that there were long lines everywhere, we easily made our way to Splash Mountain and got Lilly measured. Now, less than 3 hours after getting measured originally, Lilly was almost an inch shorter! But still measured tall enough, thank goodness – but next time we’ll make sure we always go on the height rides earlier in the day so she doesn’t shrink too much!

But Lilly wasn’t trusting us anymore. We’d already gotten her to ride Big Thunder, now she knew this wasn’t her typical laid back easy going magical day. As we were about to get into the fastpass line, Lilly said she had to go to the bathroom. I took her, and we were on our way again. Walked through the whole fastpass queue and as we were waiting to get in our boat, she said “potty!” I said, Lilly you just went potty. Then she said “wet!” Turns out, she was scared of new rides now. She was just a little bit wet, and I made the decision any mom would make… I mean, this was a water ride after all. I said “C’mon Lilly” and plopped her into the boat.

Anywho, she liked the ride. Loved Big Thunder more, but Splash Mountain was still good. She enjoyed the actual ride part more than the drop, but didn’t mind the drop – she was more concerned because she got a drop of water on her head, my little princess. But she didn’t absolutely love it enough to make it a priority in the future. I don’t totally love it myself, so that’s fine with me!

We bought the picture of me, Jon, my dad, Cassidy and Lilly going down the big drop, which was priceless. 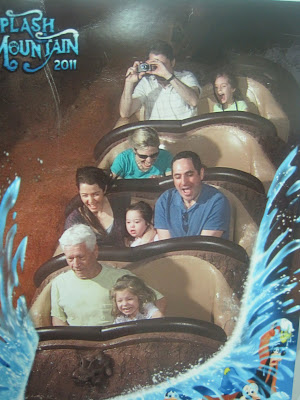 Next stop was lunch at Crystal Palace. The good buffet with Winnie the Pooh characters coming around to each table. The salads were especially good, as were the desserts. As it was 11:30 am, none of us were starving but of course we left stuffed. The girls liked saying hi to Pooh, Eeyore (he came by twice!), Piglet, and Tigger. They participated in the parade around the dining room with the characters as well, although got a little lost on their way back to our table. 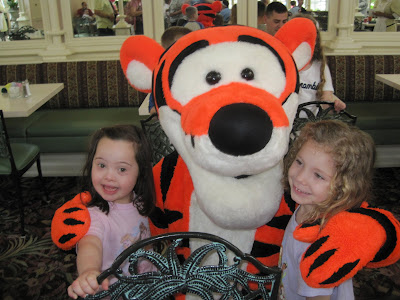 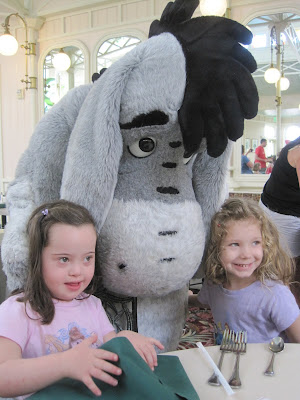 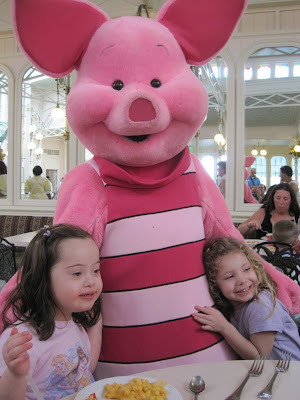 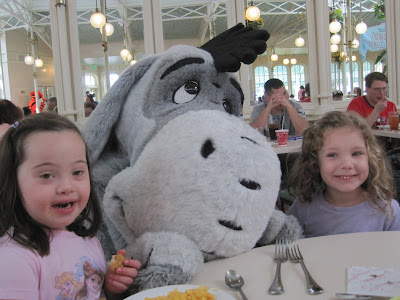 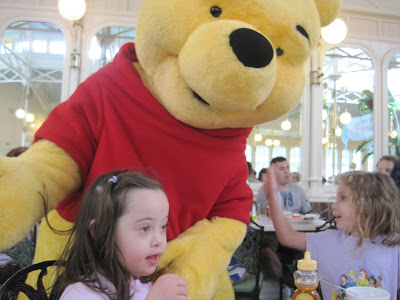 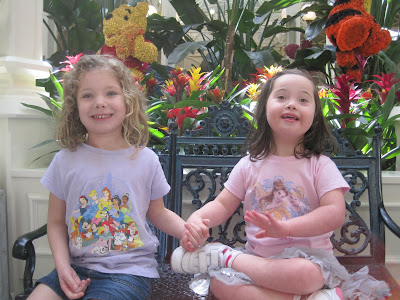 By now it was about 12:45, and we went to use our fastpasses on Winnie the Pooh. However, the ride had broken down so we turned around to go on It’s a Small World. Jon left for a bit to do some work, and my dad and I took the girls on the ride. Another favorite of Lilly’s, and I love hearing her sing the song.

We then went on Winnie the Pooh, which is one of Lilly’s favorites as well. And then decided to call it a morning.

We accomplished a lot in the morning – there wasn’t necessarily any “must do” that we missed. We got back to the hotel around 2, and we all laid down for naps. The girls easily fell asleep, as did my parents. I read a book, which was so relaxing to me!

The girls were up around 4, and we decided to go to the pool. Cassidy loved the slide, and Lilly loved playing in the water with Jon. Lilly went on the small slide a few times and the huge long slide once (she ended up flying down the end backwards and upside down, so note to self: maybe wait a year – but she wasn’t upset at all).

It started to get chilly, so we went up and changed and got ready to go back to Magic Kingdom for the night. I think we arrived around 7 or so. We went to Tomorrowland to ride Buzz Lightyear and the Tomorrowland People Mover; however when we were about to get on Lilly said she had to go potty so Jon and Lilly and I split up from my parents while they took Cassidy on those rides. After the bathroom Lilly went on Astro Orbiter, which is another absolute favorite of Lilly’s (it’s like Dumbo but it’s spaceships and it spins fast and you can see all over Magic Kingdom because it’s high up in the sky).

Meanwhile, Cassidy rode Dumbo with my parents (like a 20 minute line, not too bad especially for Dumbo) but it was after 8pm. Lilly danced a bit at the Tomorrowland dance party (she loves dancing!) and we watched the fireworks. She has a love hate relationship with them. She doesn’t like them being so loud (like me) but she loves watching them (like Jon). So while she watches them, you basically have me covering her ears and then when they take a quick break for a minute she claps so incredibly enthusiastically, it’s like the happiest moment of her life. Then Lilly went on the Carousel twice - she loves riding a horse on there – and she made Jon and I sit on horses near her instead of standing next to her. Meanwhile Cassidy did Snow White twice, including once with just Jon. Both girls were incredibly happy by the end of the night. 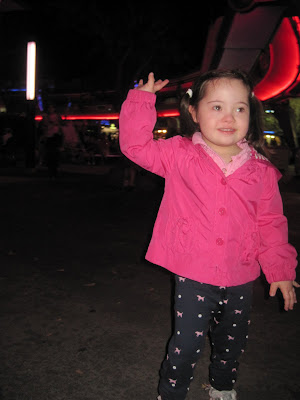 It was a great day at Magic Kingdom.
Posted by Cathleen at 5:33 AM