Apologies in advance for going out of order. Sunday through Thursday were good days in Atlanta, Savannah, and Hilton Head, and I’ll recap them shortly. But like when we were on the trip itself, I couldn’t wait to fast forward to Disney World! Here’s our first morning at Magic Kingdom…

This post could easily be called “How to have an easy laid-back day on one of the busiest days of the year at Disney World.” Or, “the day I measured over 40 inches, by Lilly Sherman.”

The key to Disney is to go against the grain. President’s week is so crazy busy at Disney, with so many schools having off for the week. Magic Kingdom opened at 8 am on Friday in anticipation for the last weekday of that busy week. I don’t have to tell you, Jon and I left our hotel at 7:30 to catch a bus to Magic Kingdom and went through the turnstiles right after opening. Do you doubt it?

Lilly was happy to see the castle for the first time this trip, and we walked down Main Street with a mission. The goal: to get Lilly measured. You see, Barnstormer, the “kids” roller coaster, was closed due to expanding fantasyland. It had a 35 inch height restriction, so Lilly was tall enough. But with a cousin who wanted to ride the 40 inch roller coasters, we wanted to get Lilly measured ahead of time to see if she was tall enough. If not, we’d do something else when half of us went on Splash Mountain. Cassidy and my parents headed over 20 minutes after us, so we had time to get Lilly measured well.

We got to Big Thunder Mountain, parked the stroller, and held hand while walking slowly up to the measuring stick. We told her to stand tall and: she was 41 inches. Whew.

I don’t think we really thought through what we’d do if she was tall enough. So of course we said “all right, let’s go” and walked right on the ride. Apparently, as busy at President’s week is, not too many people want to explore Magic Kingdom before 9 am. So, no wait for us. We stood for just a minute for the next train to come in. I asked Jon if we were crazy, and he said of course, and we got on the wildest ride in the wilderness.

Lilly loves roller coasters and action and excitement and motion. I’ve loved Big Thunder as my favorite coaster since I was little. I figured she’d like it. But I forgot how LOUD it is! That was the only thing that bothered her, and we put our hands on her ears when we got to the extra loud parts. The motion of it itself was half really exciting and fun and half a little overwhelming. We interviewed her afterward for her reaction. We didn’t go on it again on this trip, but I wouldn’t be scared of her doing it in the future. She had a good time.

Lilly loves the teacups. Jon and Lilly always want to spin them much more than I think we should! But Lilly had a blast. That’s the one ride that Lilly kept talking about again and again on the vacation, I feel bad that we didn’t get a chance to go back on it. After getting off the ride, we spotted the Rabbit from Alice in Wonderland, and Lilly happily took a picture, even though she has no idea who he is. 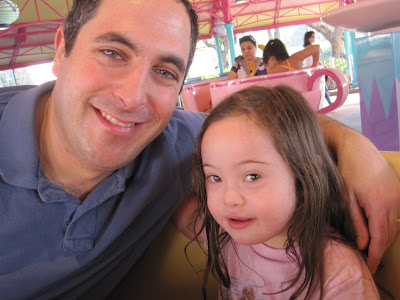 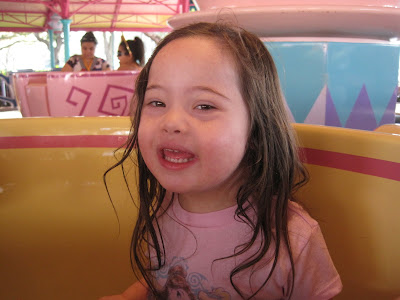 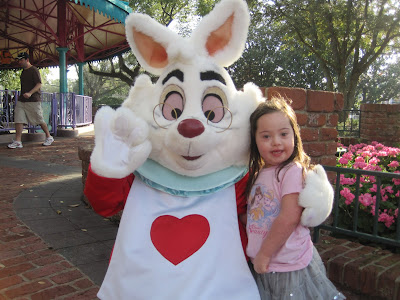 We walked back down Main Street to the front of the park for Lilly’s 9 am hair cut appointment at the Barber Shop. It’s about $15 for a good kids hair cut.

When we got to the outside of it, Lilly immediately said: “I don’t want a hair cut!” She remembers everything – Jon said it’s funny how people are always saying that they’d wait until their kids are much older to do Disney, why would we bring Lilly when she wouldn’t remember? Well, this little girl remembers everything. She anticipated the castle before she saw it, she knows Main Street. When we walked past the Riverboat earlier that morning she said “Tiana! Princess and the frog!” because last year they had a Princess and the Frog performance in that spot. And she knows a building she hasn’t seen in a year has scissors in it that will chop off her long beautiful hair.

We made an appointment for this so we wouldn’t have to wait, and she was the first person they let in the door. By this time, Cassidy and my parents joined us. The barbers were so sweet to Cassidy, since she wasn’t getting a hair cut (she’d had one recently), they asked if she wanted pixie dust so she’d feel special too. And the sprayed her hair and put confetti in it. Meanwhile, Miss Rapunzel was having her hair cut off. A really good hair cut – they took the time to make sure everything was cut well and even.

Next up, Cassidy wanted to go on Haunted Mansion. It’s not one of Lilly’s favorites, but she usually doesn’t mind it. But today, after going on Big Thunder Mountain, she was a little more hesitant because she didn’t know what to expect now that we threw her on a big girl roller coaster. And the rest of the rides that day she was a little scared.

We stopped for bathrooms after that, and got a last minute reservation for lunch a couple hours later for Crystal Palace, and then walked over to the Princesses, who are now greeting people in Adventureland. It was a 15 minute wait at almost 10 am, but worth it – Cinderella, Belle, and Sleeping Beauty. The girls were so precious, they held hands as they walked up to each princess to say hi. The princesses themselves are so gracious and sweet, and it was a really nice experience. 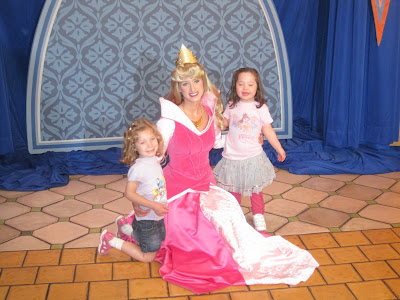 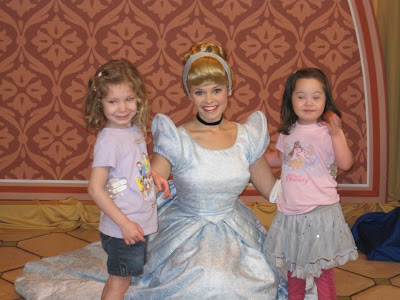 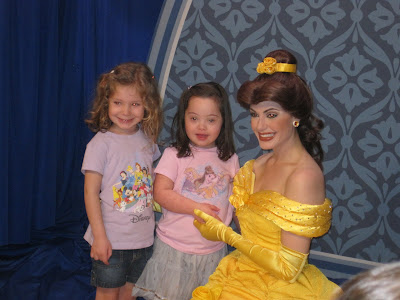 That day, I wasn’t exhausted at this point. But today? I’ve only written through 10:30 AM and I need a break! But so far it was an excellent morning, two happy girls, 4 happy adults, our fastpasses in hand to ride Splash Mountain – would it be a great adventure or Lilly’s worst moment yet? And lunch with Winnie the Pooh and friends… would the girls love it or hate it? Can continue our streak to avoid the crowds on one of the busiest days at Magic Kingdom? Will the day remain as magical as it began? Wait and see!
Posted by Cathleen at 4:17 AM

Omg, this stuff always makes me all teary-eyed. I get so *verklempt* seeing how affected children are by these kinds of experiences and the joy they feel themselves. I was picturing Samantha doing all of those things (well, not the rollercoaster - I got a sudden, sharp twinge of anxiety at that thought, because I could envision us stuck in the middle of a ride and Samantha screaming her head off to make it stop!), too. LOVED, LOVED, LOVED the video!!! She's such a beautiful little princess!!!

Ahaha, SO CUTE!! That video made me laugh.. my little RayRay is always so concerned with things being "too moisy".