You Are What You Eat

One of the things I've tried to accomplish since becoming a stay at home mom is nutrition.

Lilly's favorite foods have always been carbs and fruits - especially bread, crackers, cantaloupe, and pineapple. And I've always made an effort to get her to eat vegetables - she likes carrots (with dip) and peas; and she's happy to eat pasta pizza, chicken nuggets, and cheese.

But in the past few months I've really wanted to get her involved with cooking and trying new foods. And, I've become much more aware of the type of foods we're putting into our bodies.

For example, Lilly loves bagels. But for the past couple months we've been getting the multigrain bagels at Trader Joe's with lots of seeds inside, and only giving Lilly half a bagel for a portion. And for snacks, instead of regular crackers, we've been doing lots of fruit - grapes, cantaloupe, pineapple, clementines (she loves peeling them herself) - and for a special treat she gets a few flax and soy tortilla chips.

Last week, I was making vegetables of yellow squash, carrots, and sweet potatoes. As I was cutting them, I had Lilly sit in the kitchen with her own kid friendly knife (which doesn't really cut but she loves being involved). As she "helped" me, she was really interested in snacking on the vegetables - of course she loves carrots, but she also tried a few pieces of raw squash and didn't hate it.

She also helped to make pizza last week, and instead of pre-grated cheese I used a whole block of mozzerella that I grated myself. She loved trying to grate it too, and took a few bites out of the whole block of cheese, before I gave her a little bowl of cheese to eat. And when I make homemade pizza I mix spinach with the sauce and she gobbles it up.

And while Lilly loves pasta (especially penne), she doesn't usually love ravioli or stuffed pasta. So, last week I bought ravioli stuffed with spinach and tortellini stuffed with arugula. I made peas and a mixture of peppers and onions. And I heated up a marinara sauce and an alfredo sauce. I laid everything out on the dining room table, and Lilly got to create her own pasta. Normally she wouldn't touch ravioli or tortellini but the fact that she got to make her own dish inspired her. She chose the ravioli with red sauce and peppers and onions. She didn't end up touching the peppers and onions, but she did eat a couple raviolis stuffed with spinach and thought they were good, and tried a few of the tortellini that were on my plate. And then she ate the bowl of peas seperately. 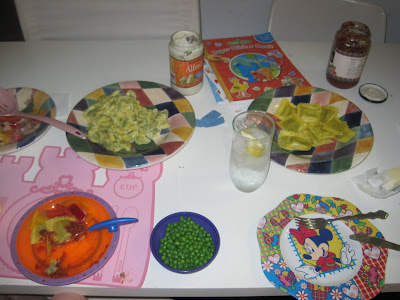 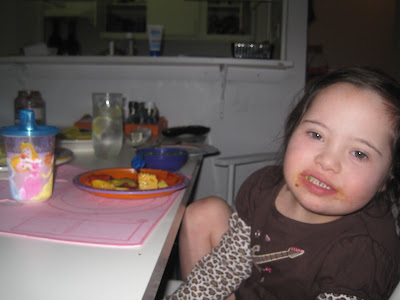 Another thing that I do is, before dinner, I'll give Lilly an "appetizer" of vegetables, so we get those out of the way before she gets to see the good stuff. And I let her eat the peas, carrots, broccoli, etc, while sitting on the couch watching tv - even though I know in theory she should be eating at the table, I'd rather her be slightly distracted and eating good nutritious food. Then when the main course is ready she sits at the table with me.

Lilly hasn't really been eating much processed food lately. And the carbs she eats are all whole grain. I gave up sweets for Lent so she's not around candy, chocolate, desserts. We don't deprive her of sweets or fun snacks when we're out - like at a friend's house she can eat goldfish crackers, or if she and Jon run out to the playground she can have ice cream on the way back - but in the house we're so much more aware of what we're all putting in our bodies. She only drinks milk (without hormones) and water (she's never liked juice so we've never pushed it), and a special treat for her is her gummy vitamins (she takes a multivitamin and DHA every day). And she eats a ton of fruit.

What's interesting is that Lilly has been so happy lately - not that she's ever a total nut, but we've noticed that her behavior has been so good. She doesn't have mood swings or tantrums, and she's easy to negotiate with if she doesn't want to do something. She's eating such healthy foods that I think her body is happy and so is her mind, and I do attribute it to not eating processed and sugary foods. Which reminds me - I need to go to the grocery store. :)
Posted by Cathleen at 5:53 AM

Sooooo jealous. Gotta get my girl eating better foods. It's totally our fault for taking the easy way out and feeding her quickly with something microwaved. :-(