Sunday: Daddy/Daughter Day at Animal Kingdom; and a Magical Night at Magic Kingdom

First, a couple random pictures because I can't get them in order: 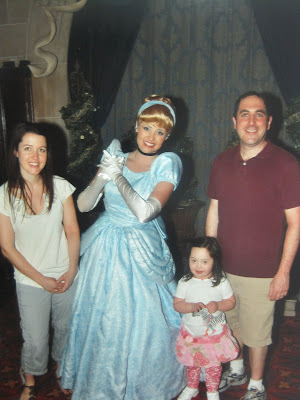 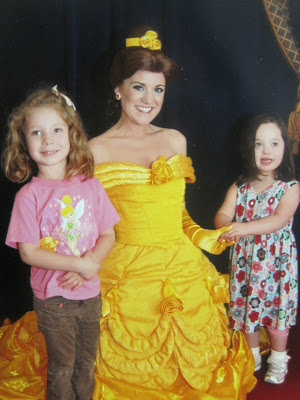 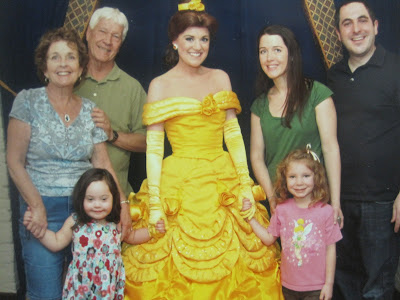 Now onto the beginning of Sunday: We sadly said goodbye to my parents and Cassidy and our beautiful room at the Animal Kingdom. And as I took care of packing and getting checked into our next hotel, Jon took Princess Lilly over to Animal Kingdom for a fun morning! (Can I just say, Jon and Lilly have fantastic adventures together. Jon is such a great dad, and loves to spend one on one time with Lilly; and she adores spending special time with her daddy.) The following was written by Jon about their morning:

As Cathleen prepared for our move to the All Star, Lilly and I took
advantage of the morning and went to the Animal Kingdom. We jumped right on the
bus and hit the park with what it seemed like a few others that morning. From
the start, Lilly was very agreeable and excited to get the day going. Our first
stop was FastPass for Kilimanjaro Safari. Lilly sat patiently in the stroller
has we walked at a brisk pace. We then walked right across the park over to
TriceroTops, Lilly’s favorite ride. She lit up when she saw the ride coming into
view and we walked right on. As the ride started going, her expression was like
a kid opening presents on Christmas morning. When the ride was over, she jumped
right into my arms and we were off.


We walked right over to Festival of the Lion King. In typical Disney
fashion, we saw both Pocahantas and 2 Bunny Rabbit friends while we waited to be
let into the show. Lilly didn’t even have to wait. The characters appeared what
seemed out of nowhere, Lilly walked right up to them with a big grin and posed
for pictures. We then walked into the show and sat right on the floor level of
the elephant section. Lilly and I practiced our best elephant impersonations as
the show started. She loved every minute of it. After the show we walked over to
Kilimanjaro Safari with our FastPass and jumped right on. In the past, Lilly had
really no interest in seeing the animals even to the point of falling asleep.
However, today was a different story as she asked about the animals and kept a
keen eye out for the next group of them.

After the ride we had an important potty break and Lilly was once again as
agreeable as ever. I then purchased a bagel for her and we walked over to
Finding Nemo the Musical. We managed to get great seats on the first row of the
second level. Lilly loved seeing all of the character run through the walkway
right in front of us. She also liked that I snuck in the bagel and let her snack
on it during the show. After the show, Lilly gave a standing ovation and we
left. Once again we took a potty break and Lilly was as easy as ever. We then
headed out of the park. All in all a very magical and very productive 3 hours in
the park. 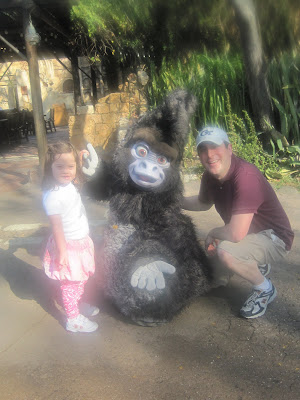 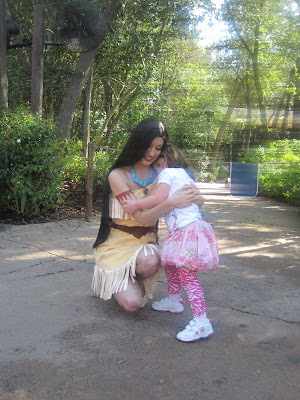 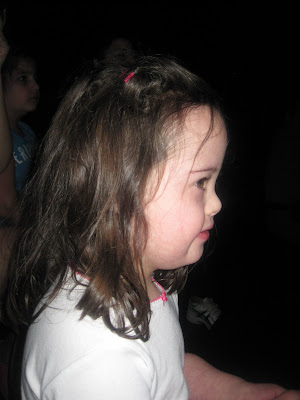 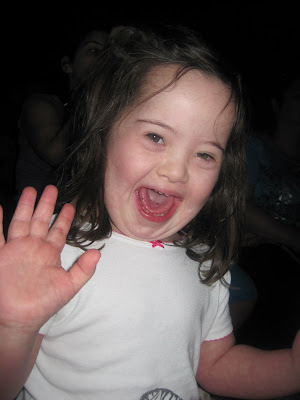 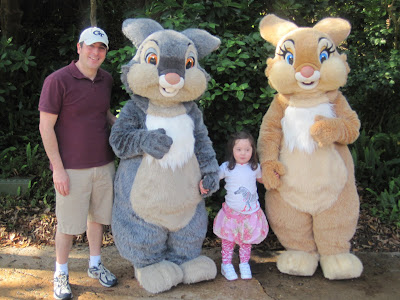 While Jon and Lilly were having a great time at Animal Kingdom, I packed our bags at Animal Kingdom Lodge, had the luggage transported to All Star Movies, stopped at the other lobby to pick up our photo cd, took two buses to All Star, and stood in an hour long line to check in.

Luckily our room was ready though, even though it was just 1 pm. Jon dropped off Lilly, and headed over to the Wide World of Sports to watch the Braves play the Mets (the Braves have their Spring Training camp at Disney World and Jon was lucky enough to watch their first game!). Meanwhile, Lilly took a nap and I read a book. I wanted her to be totally rested for our evening…
Around 4 Jon got back from his event and Lilly and I were waiting for him. We got on a bus headed towards Magic Kingdom, and when we entered the park, the flag retreat ceremony was happening – we stopped and Lilly loved the patriotic music. Then we walked straight towards the castle for our big event… dinner in Cinderella’s Castle! 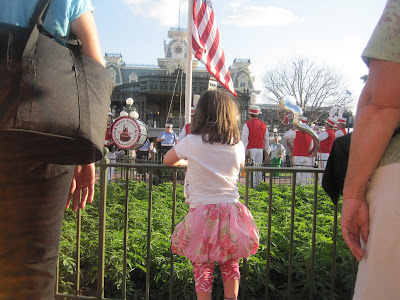 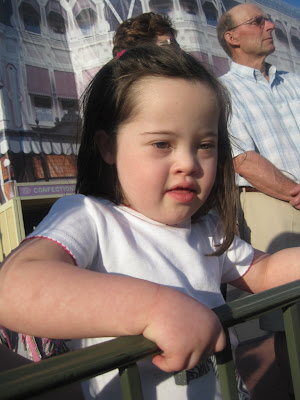 We did a deluxe meal plan for that one night because it saved money if we were eating at Cinderella’s Castle and one additional meal (and we had saved money staying at All Star), so there’s the justification. Plus, this is our last trip to Disney World in the forseeable future – we have our big Mediterranean cruise this summer and I don’t anticipate much traveling after that with Jon starting work, Lilly starting school, etc. And our annual passes run out in a couple months. So (justifying again) this might be Lilly’s last time eating in Cinderella’s Castle as a “little girl.” Justifying complete.

Even as an adult, there is something magical about eating at Cinderella’s Castle. First of all, the castle is so pretty. And, it’s so hard to get a reservation (mine was an elusive 5:30 dinner reservation that magically popped up a month prior to the trip – how could we not take advantage of that?) so eating there feels even more special. We checked in, and they were immediately ready for us. We stood in line to see Cinderella and take a picture. Lilly was so excited. “Princess!” “Cinderella!” She loves her. She’s so shy with the princesses face to face – although when other families are taking pictures she’s happy to shout “Hi Cinderella!” But even being shy, Lilly knows what the real deal is: she eagerly stands and poses and knows she’s getting her picture taken so that we can remember this moment.

After the picture, our name was immediately called to eat upstairs. We had a table in the center of the room, and our enthusiastic waitress brought me diet coke (me) and water (Jon) and we ended up having 3 refills of each! Plus two refills of bread; can’t help it. We ordered our appetizers, entrees and desserts, and the service was so efficient – perfect timing on everything. As we finished our main course, the princesses started getting announced: Snow White, Aurora, Belle, and Jasmine.

Jasmine is less frequent at the princess meals so we were happy to see her – it was the only time we saw her all trip. And by the way, since we got back Lilly has started really loved Aladdin. The funniest story: tonite Lilly wanted to watch Aladdin after her bath. (She usually watches about 10 minutes of a show while I get her pj’s on.) And she’s sitting in the bathtub, we’re just chatting, and I say to her: “Do you want to watch Aladdin on tv, or a special Broadway Aladdin on the computer?” (There’s an Aladdin production at Disneyland in CA that Lilly was once when she was 23 months on the way to New Zealand and even that young she LOVED it – until she fell asleep! But we totally forgot about it, until we were talking about Aladdin tonite.) Anyways, Lilly’s face lit up and she said: “Aladdin? Broadway show? Yay!!!!” I love that my 4 year old daughter knows what I mean when I say the word Broadway – that it will be a huge production musical version of whatever show she likes. Her New York year has definitely made an impression. And after she got out of the bath, she watched 2 songs from the Disneyland musical performance of Aladdin and was HOOKED. I think we’ll be watching a little more in the future, she loved it so much.

Anyways, back to Cinderella’s Castle. The princesses were gracious as always. Lilly was so excited to look around the room and watch them greeting all the other tables and was so excited when it was her turn with each one. 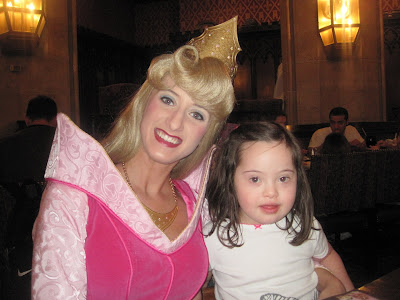 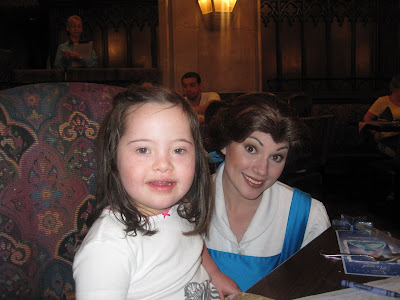 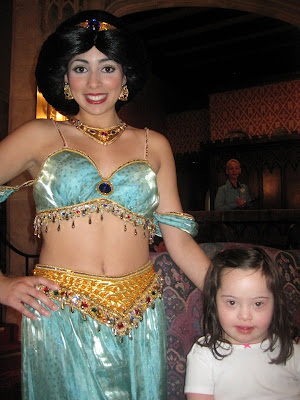 After dinner, we hit the potty and then walked over to see Lilly’s speech therapist from when she was a year old, who just happened to be at WDW that weekend running the Princess Half Marathon. Lilly hadn’t seen her in years! We watched a parade with her family and caught up.

Then we went to the Aladdin Magic Carpet ride, which is like Dumbo, and Lilly had a blast.

Afterwards we were walking for a minute to figure out what to do next and all of a sudden, Tiana and Prince Naveen showed up and Lilly got to be the first person to take pictures with them! It was like one of those magical moments – I had given up on seeing them this trip (they’re hard to find) and they’re not even usually in Adventureland. So it was a very lucky moment for Miss Lilly. I’ve said before that I love all the characters’ interactions with Lilly, especially the princesses. But Naveen and Tiana from Princess and the Frog are probably my favorite. Both this trip and last trip, they paid so much attention to Lilly. They were funny, personable, just great experiences. So even though they’re hard to find, I highly recommend them. That moment probably made our night. 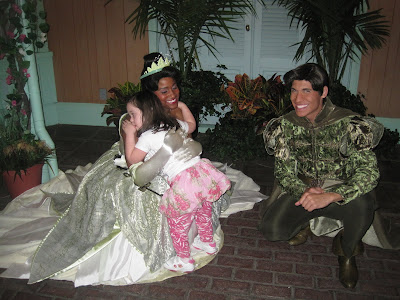 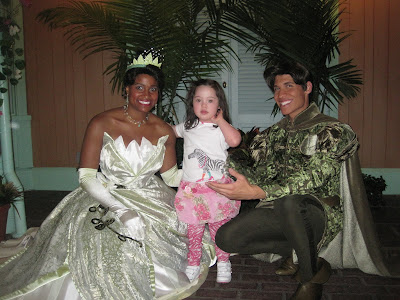 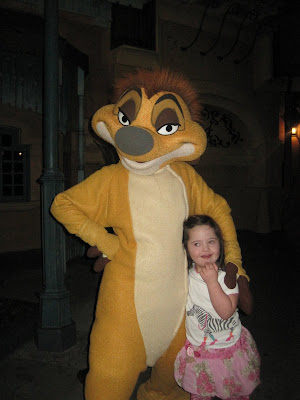 Then we went to Peter Pan to use fastpasses, but Lilly didn’t want to go on it. So, we went on the Tomorrowland and went on the Transit Authority. It’s such a nice relaxing ride around Tomorrowland; and there are a couple times when it speeds up and goes in the dark that make a 4 year old happy. Then we saw the Carousel of Progress. It’s probably been a year or more since we saw it last; Lilly didn’t really have a good reaction (or bad) the last time – just neutral – so we didn’t really make it a priority. But this time Lilly actually liked it (not loved it) and laughed and paid attention and sang the song and pointed out the dog in each scene, etc. So it was good.

Then, we called it a night. It was after 10pm at this point, and we had to get up early the next day. We were home just before 11pm, and Lilly went straight to sleep.

Seriously, Lilly is the BEST traveller!!! I wonder if Samantha would do better with new stuff like that if she were with a little friend. Still hoping for Sesame Place next summer. :-)

Remember that if you and I do a girls' weekend you won't need tickets, so maybe we could sneak down sometime in the fall...Do you have your school calendar yet?