Lilly looking grown up - thanks to Grandma Myra for the adorable outfit! 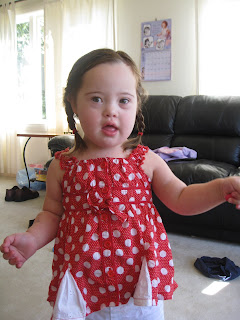 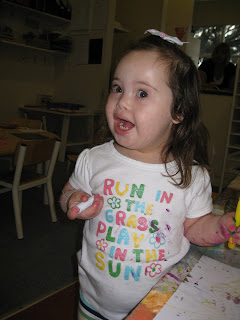 Lilly at a birthday party. 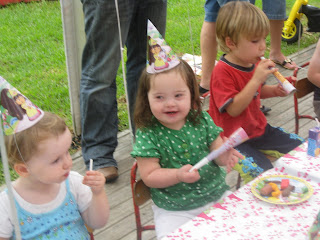 Happy Valentine's Day! When she was still in the younger toddler class at school.
(Thanks to Myra for the shirt and Aunt Jenn for the pants!) 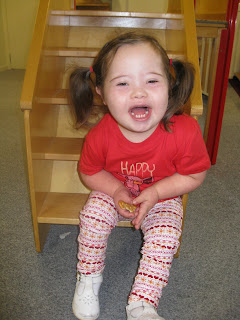 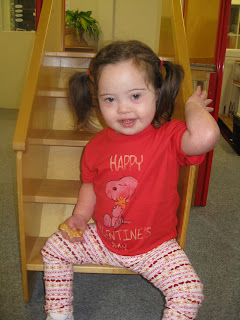 So as I mentioned previously, Lilly is now a "big kid" in the older preschool class at school. Actually, she's the littlest kid there - she's a little over 2 1/2, and the class is from 2 1/2 to 5 year olds. So it's a big age difference, which I was originally a little worried about. They have to bring their lunchboxes for "morning tea" (snacktime), drink out of an open cup, many of the kids are toilet trained, and when Lilly walks in, she has to find her name (with no picture, just the name) and put it on a magnet board.

Needless to say, Lilly's mom was overwhelmed. Would my child survive? Would she be able to find her way in this older class, with all new (or mostly new, a couple kids she knew from the younger class) friends, 4 new teachers, and a higher level of expectations?

It didn't help that, on the first day of school when I dropped her off, two little girls who were just a few months older than Lilly, were asked in front of us "What would you like to do today?" One little girl said "I'd like to play with the blocks." The other little girl said "I'd like to help, and build a house for Hugo." Seriously? Lilly is talking a lot more, but not like this! For example, Lilly can say "I ride da bike." But she certainly isn't saying she wants to build any houses for Hugo!

So Lilly's mommy dropped her off every morning, and worried. But Lilly seemed to survive. I wondered if she'd be overwhelmed, or unhappy with all these older kids? But yet again, as is the constant theme, Lilly did fine - in fact, she has done amazingly. When I picked her up yesterday, Lilly was sitting next to her new friend, a precious little 4 year old named Erin, who supposedly "looks after" Lilly. I introduced myself to Erin, and said "I'm Lilly's Mom." Erin smiled at me and said, "I'm Lilly's friend." As my heart started to melt, about 5 other kids walked over and said their names, and each one said "I'm Lilly's friend too." Awww, how sweet! Lilly's mommy never has to worry about Lilly, she never seems to meet a stranger. The teachers said that all the older girls especially, want to hang out with Lilly and play with her. And a little boy, who is German and apparently doesn't speak much, is suddenly talking and proclaiming that he is Lilly's friend as well - and they reportedly danced together all throughout mat time yesterday.

So Lilly is fine. She loves her school, loves her friends, and has a great time. She has discovered a love for painting, and has ruined many shirts in the process! She is mastering drinking out of the open cup, and the other kids have even taught her the new skill of sticking your finger up the water faucet so the water sprays everywhere. Yes, Lilly is thriving. Except, Lilly's a little worried about her mommy... ;-)
Posted by Cathleen at 3:20 PM No comments:

Things have been crazy busy around here.

First of all... the reason why I cant sleep in the middle of the night so I'm up writing this blog... I lost my camera. It wasn't a super-expensive one, or one with a bunch of tricks - I mean, it's totally replaceable (once we get back to the US, of course) but it had some adorable pictures of Lilly at school on Valentine's Day and then at her friend's birthday party, and I'm just so sad to have lost out on those. We lost the camera somewhere between the house and a pool party on Sunday, so honestly I have no idea where it could be, but I cleaned out the entire house looking for it - I'm thinking it must have fallen out of Jon's pocket at some point and it's probably gone for good. Not that I'm laying blame on anyone... Because I lost our old camera about a year ago, and luckily recently we found it, so aside from those poor adorable Valentine's Day shots that can never be recaptured... we have another decent camera we can use until we get back to the US.

But the camera thing is just an example of how crazy busy things have been around here. Like, why are all 3 of our computers having problems at the same time? And why did I have horrible back pain for 2 weeks, and then it mysteriously disappeared? And why did Lilly get attacked by 10 mosquitos the same day we realized she's allergic to their bites... poor girl with huge pussy red arms! (And even a bite on her poor little cheek!) And work is busier than ever for Jon and I, and now Lilly is moving up to the older preschool class at school... which part of me is thrilled about, but for some reason *I* am the one feeling intense stress about it - but luckily little Lilly is just happy to be in a new room with new toys to explore. Meanwhile, I'm making sure she has her High School Musical lunchbox packed with a healthy "morning tea" snack (complete with the Elmo ziplock bag for her fruit), her Princess backpack has everything she needs for the day, and just generally worrying about the new phase of her life... I mean, it's just across the hall from her old class, but this class has real hammers and nails and super-sharp saws! She's with the big kids now! But we love her teachers in both classrooms, and they are making it an easy transition for her... just wish they could help her mama's anxiety!

But overall we're doing well... Lilly has entered the more stubborn phase of the wonderful two's - she is a complete joy but only when she's doing what she wants to do. It's not bad because sometimes she can easily be swayed into thinking she's decided to do whatever we want her to do, but the trick is to make her think that it's her idea. And it's completely different every day as to what the challenges will be... For example, every morning our routine is getting her diaper changed, getting dressed, eating breakfast, getting her hair done, putting on her sunscreen, putting on her shoes and socks, walking to the car, and being strapped in the carseat... usually about 2 of those things she will completely resist. But it's a toss up each day as to which thing it will be. Oh, and she doesn't like baths anymore, starting about a week ago... she likes showers. Except... today she liked taking a bath and didn't want to get out. And she doesn't want to sit on the toilet anymore, starting a month ago. Except at school she's showing an interest, and tonite she requested the toilet (and a marshmallow, of course). So ya never know, but it keeps it interesting.

As far as Lilly's monthly movie updates... she still LOVES High School Musical, Annie, and Elmo, but in February we watched Dirty Dancing quite a bit (she actually loves the whole movie, surprisingly) and this week we just started watching the Sound of Music. Which she absolutely adores, you should see her get down to the nuns singing the same way that she does for Zac Efron! But she is not a fan of the boring "talking" parts, but loves anything with singing and the kids. And especially those nuns!

We're at the 3 months left mark in our New Zealand journey, so we're getting excited about being home soon, but there is so much to do to get ready! We've already sold our first thing (Lilly's NZ stroller) on trademe.co.nz (their version of ebay) - can you believe I sold it for the same price I bought it new?! There is just always so much planning to do in general, it seems... our flights home, Disney World, Lilly's birthday party, the 3 weddings we're going to this summer... It's hard to keep track of all of it! But the oddest thing for us is, that it's the first time in a long time that we have 3 months in front of us with nothing immediate planned. No visitors, no traveling, nothing. Not that it'll be boring, and we're looking forward to everything when we get back home, but it's just so strange not to be packing for some big (or even little) trip. We've accomplished a lot in our time here, but it'll be nice to get back to normal and not feel like perpetual tourists.

Anyways... now I'm just rambling and it's almost 1 am so I'm going to get to bed... Wish I could have posted some amazing pictures of Miss Lilly but we are so sad to be missing our camera! I'll get the new (old) one charged up so I can start taking pictures again this weekend. Until then...
Posted by Cathleen at 3:07 AM 2 comments: