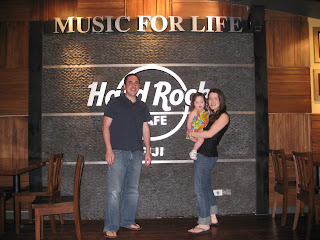 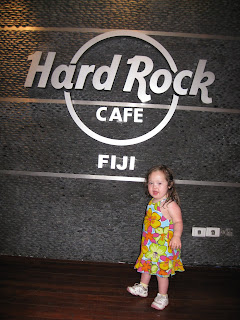 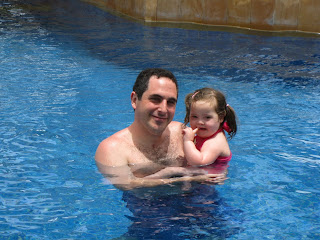 Lilly & Jon at the Westin Pool 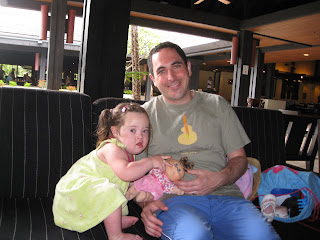 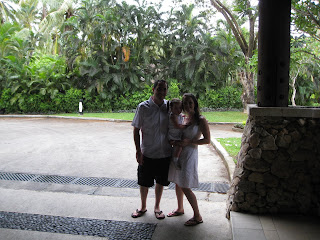 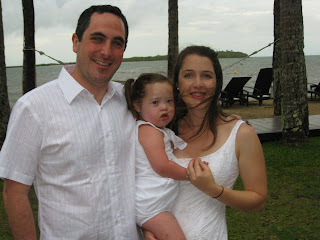 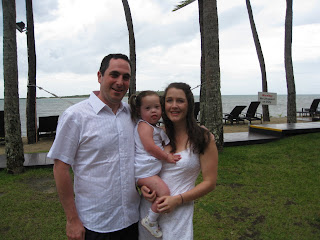 Thursday morning we went to breakfast, then Jon took Lilly to pool while I packed up. We got her last free Shangri-La kids meal lunch, before hopping in a taxi for the next resort, the Westin on Denarau Island. Lilly slept on the way, it took about an hour to get there.
Denarau Island is about 15 minutes from Nadi, the biggest nearby town and where the International Airport is. We decided to transfer to that hotel for the last two nights for a few reasons: 1) I couldn't commit to 7 nights at one hotel because I was scared if we didn't like one, then we'd be stuck there the whole time. 2) Our flight was leaving at 10 am on Saturday, and I thought it would be easier to get to the airport from there. 3) Lilly loves variety, and I thought having a few different experiences would be more fun. 4) The Westin is a 5 star hotel, and we got a great deal on Expedia, so I couldn't pass it up. 5) It shares amenities with the Sheraton & the Sheraton Villas, so we got 3 resorts worth of activities & pools & restaurants. And 6) Denarau Island has 5 nice hotels right near each other with a free "bula bus" that transports you to all the local resorts, plus a port with restaurants, so we'd have plenty to do even if we were tired of the beach by the end of the trip.
As we arrived at the Westin, it is visually a beautiful hotel. It was redone a couple years back. We were given some kind of tropical drink during our check in, and the room itself was gorgeous - very "Fijian" - but with the luxury touches of a nice hotel. The bed itself was so soft, even Lilly decided to take a nice nap on it. (She was probably missing her crib at the Shangri-La though, which had a baby feather bed.)
However, we definitely preferred the Shangri-La in other aspects. The Westin, while very nice, felt a tiny bit less friendly, and a little less kid-friendly. There was less for Lilly to do, although we still had a great time for the couple days we were there. We also had ants in our room, which was a little disappointing.

But back to the trip: After settling into our room at the new hotel, we went for a walk to view the Sofitel and Sheraton hotels. Then we sat at the hotel lounge and drank local beer "Fiji Bitter" and "Fiji Gold" and Lilly ate a fruit kebab, while we listened to a local Fiji band. It started raining, so we went to Port Denarau for dinner on Thursday night, on the Bula Bus. The Bula bus is an open vehicle, with a festive atmosphere by everyone on it, and Lilly loved looking out the open sides and waving at everyone we passed by. The 2 year old next to us stuck her foot out and lost her shoe so we're glad Lilly didn't get any ideas!
We decided to celebrate Thanksgiving partially on Thursday (although in the US it was Wednesday) and partially on Friday (US Thursday); so for dinner on Thursday we ate at the Hard Rock Fiji. It tasted like real American menu items, and was delicious. The food in Fiji was pretty good, and NZ food is nice and fresh, but it was so nice to eat at a "chain" restaurant again where none of the flavors really surprised us. I can't really adequately describe it, but I'll just say it was our favorite meal - nachos as an appetizer, a veggie burger for me, ribs & brisket for Jon, and surprise surprise, chicken fingers and french fries for Lilly. But even the ketchup was regular US style ketchup, not the sweet "tomato sauce" ketchup that we get in NZ. Anyways, Lilly was in a great mood during dinner, and all the girls who worked in the restaurant made such a fuss over her.

We woke up on Friday morning, and ate at the free buffet breakfast at the resort. It's amazing what a presentation they put out! Although the Shangri-La buffet breakfast was impressive, it was nice for a change of pace, and the Westin even had champagne for mimosa's. After breakfast we put our swimsuits on in time for it to start raining; so we jumped on the Bula Bus and went to tour the other hotels - the Radisson and the Sheraton (who happened to have a bunch of musicians playing when we got off the bus). By this time the sun was out again, so we went to the pool. We ran into friends of ours from the Shangri-La who have a 1 year old little girl, and later on we ran into other friends who have 2 kids from the Shangri-La. It was such a funny experience to "know" people in Fiji! We also kept bumping into a few Americans who we had met at breakfast, throughout the day.
Lilly seemed a little tired at the pool, and we started walking back to get some lunch for her. I was carrying her, and all of a sudden I looked over and she was sound asleep on my shoulder! We brought her back for a nap on her Westin "Heavenly Bed." Since none of us had lunch, after her nap we went back on the Bula Bus to the port and ate at a cute pizzaria. It was our first pizza experience in 6 months of eating "normal" pizza - it tasted like US style pizza. (Our last time having US pizza was in Charlottesville the night before we left, at Christians with Leslie & Jamie!) NZ pizza is ok, but it's generally made with lots of random toppings, a "large" is the size of a "small," the sauce is sweet, and it's usually made with "tasty" (a.k.a. cheddar) cheese. Anyways, it was delicious and a wonderful second "Thanksgiving Dinner." Lilly loved it too, and even ate tons of raw carrots off our salad.
Friday night, we went to the touchlighting and fire dancing show, which was a free 15 minute show at the hotel. Lilly absolutely loved it, and as we left she kept signing "fire" and twisting her arms the way the guys did who were throwing their fire sticks. This girl gets all the experiences in life!
Saturday morning we woke up early, ate at our last free buffet for awhile (surprisingly we didn't gain weight on the trip!) and got in a cab for the airport. When we walked inside with our 3 huge suitcases, 2 carryons, a stroller, and a little princess, we spotted the longest line ever for our flight. Disappointed, we started making our way over. Then one of the airline employees spotted us and told us to go in the short "business class" line to check in. (We almost considered upgrading while we were there, by the way, as it wasn't too much! But decided against it.) But they checked in all our extra heavy luggage without any weight penalties (max is 20 kg per person; ours were 30 kg per person - oops!). Then we got in the even longer line to go through customs and security. After standing for 2 minutes, a guy came up to us and told us to follow him. He brought us to the front of the customs line, then to the front of the security line, then helped carry our bags all the way our gate! At this point we were kind of embarrassed about bypassing any wait and having so much help, not to mention Jon was out of cash! Jon, being the American that he is, said to the guy "Is there an atm nearby? It'd like to give you something for helping us." (Because seriously, he probably saved us an hour, and a few tantrums.) The guy said there wasn't, but thanked us for letting him help us, and walked away. We felt kind of bad, and figured that he was a little disappointed for not getting a tip; but then 30 minutes later when the flight started to board, the guy came back and found us, and put us ahead of everyone again for getting us on the plane. He walked us all the way onto the plane, carrying our bags and helping us shut down our stroller, meanwhile knowing we didn't have any cash. This is typical of the friendliness that comes from Fiji - and a HUGE thanks to Miss Lilly Lou for being so adorable and getting us the extra help!
The flight itself was noneventful; we had lunch on the plane and Lilly at all my fruit, before falling asleep for the next 2 hours or so. We arrived in NZ and were escorted to the front of the customs & immigrations lines. Whoever said traveling with children is hard, has obviously not flown with a Little Princess!
All-in-all, the trip was great. Lilly had a wonderful time in all the different situations. She was an easy traveler. There were a few tantrums along the way of course, but it's hard being 2 sometimes. I'm shocked now thinking back that she ate out & behaved in restaurants for almost every meal for an entire week! (Although now we're so broke we won't be eating out ever again...) As always when we travel with her, we fell in love with her all over again, and it was so amazing spending a week of nonstop fun with our little girl. Jon & I had a great time too; it was nice being at resorts that had so much for both children and adults to do. It was also nice getting home on a Saturday, so that we had all day Sunday to unpack and relax; much less stressful.
Thanks for reading all about our Fiji adventures with a toddler! I'm sure it's a little over-inclusive, but it will be nice for us to look back on our trip and remember the highlights! Bula!
Posted by Cathleen at 2:24 PM

I loved her John Travolta move you described...so glad you all had a great trip and got some time away from the everyday stuff.

The pics were great, you all look wonderful, and Lilly looks more and more like you each day, I mean you can see both of you in her, but this set of pictures she's all Mommy:)

Lots of love and Happy belated Thanksgiving, glad you got some "chain" food!

I love hearing all the details...I think you should write for a travel magazine reviewing hotels (only the five star ones, obviously). Your pictures are amazing.