Lilly celebrated Halloween this year New York style - which means walking the streets, collecting candy from random stores and down the halls of tall apartment buildings.

We started out with Lilly's aunt and cousins; but Lilly didn't want a costume. We picked out Snow White for her (who she absolutely loves) but she wasn't impressed. Probably because it's a costume in her everyday costume trunk so it's not special; besides she had just worn it recently at Disney World. So, she walked the halls of her cousin's apartment building just wearing her winter coat, but still got tons of candy. Highlight was hanging with 3rd graders who hooked her up with extra candy. She managed to pose with a random mask along the way. 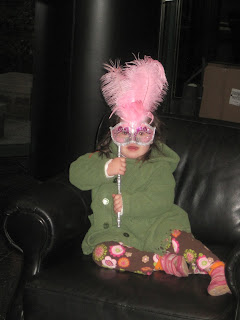 We headed back uptown to our apartment, where there was more trick or treating in our building. Here's how it works: you get a list when you go into the building of which apartments are accepting trick or treaters. In our building of 36 floors, most of the floors had at least one apartment participating. I was determined that Lilly would actually wear a costume this year. So, when we got home, I sifted through Lilly's costume trunk and picked out a pink fairy (from New Zealand) and a pirate costume (from our Disney cruise last year for Pirate night, but Lilly never actually wore it). At first Lilly didn't want a costume but when I gave her a choice, she picked the pirate and we threw it on her with a big bow and at 6:30 on Halloween night, Lilly's costume was chosen. But she was adorable!

She loved trick or treating, especially knocking on doors and collecting candy. Best treat of the night was definitely the pencil she collected early on. She was thrilled. 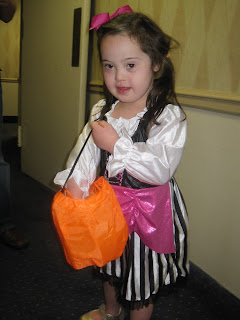 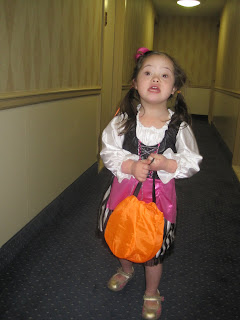 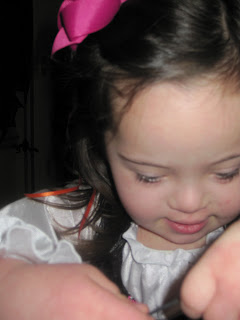 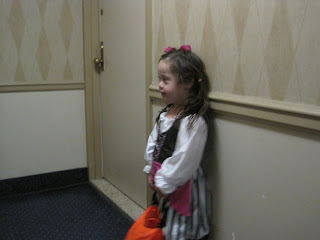 After walking 36 floors, she and Jon returned and we ate pasta and salad for dinner, she watched part of Camp Rock 2, and she had a nice relaxing bath - all without touching a piece of candy. Not to be a horrible mom, I decided to let her have at the candy. She sorted through each piece, and I wondered if she really appreciated that all this was her sugar, ready for her to sample a piece or two. Yet my girl didn't let me down - 79 pieces into her hunt, she found a Hershey's milk chocolate nugget and went to town. This girl is patient but she got what she wanted.
All in all, a successful Halloween. 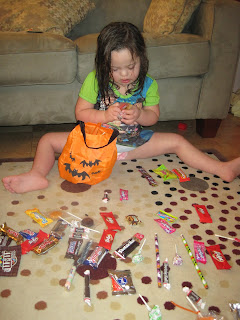