We have 3 weeks left until we leave Charlottesville for good. Having moved & switched schools frequently as a child, I'm used to goodbyes. And we said this same goodbye (albiet temporarily) two years ago. And then last year we said goodbye to New Zealand.

The packing up of all our worldly possessions is hard. And saying goodbye to all the people we see on a daily basis is hard. And knowing we'll no longer eat at that restaurant or swim at that pool or drive on that road is hard. But we're prepared for all that. We've done that before.

The harder part, for me, is thinking about saying goodbye to our memories here. Seven years ago, Jon was 26, and he moved here to start his residency & neurosurgery career. A couple months earlier, we stopped here for the first time and picked out his apartment at Lakeside, and bought furniture - a cheap dining room set that I'm sitting at right now, a tv, and a futon - all from K-Mart. We were engaged, but I was finishing my first year of law school at Mercer.

Luckily, I was able to transfer to Washington & Lee, an hour from Charlottesville, at the end of the summer. I was 22 years old, a second year law student, and Jon was an intern working crazy hours. We were so young then. We were planning our wedding for the end of that year, May 15, 2004, and it was such a beautiful day. Around the same time, we moved into our first house, which we will leave in just weeks. We had nothing when we bought it: just Jon's furniture from K-Mart. The day we closed on the house, we went to Grand's furniture and bought our living room and bedroom set. And my parents bought our dining room furniture. My mom and aunt Janie came up and decorated our house; Jon said when he came home from work that night that it now really felt like a home.

A year after our wedding, we celebrated my law school graduation. So many friends and family members came in town for that. I studied for the bar at home every day that summer of 2005, and took the bar July 26 and 27, 2005. A few days later, I started my first real job, where I still work 5 years later.

Our life was in motion. Jon was in his third year of residency, I was finally out of school and working, and something was missing... And then we got pregnant that fall and were thrilled. And then over the next 9 months we went through every emotion in the book. We were worried about the health of our baby, I was worried that I gained 60 pounds with pregnancy, we were so excited to have our little girl join us soon, and Jon and I became closer than ever going through this experience together. I went into labor almost 4 years ago while sitting on the couch reviewing Utah proof on a Sunday. It was Father's Day, and Jon still insisted on going to Aberdeen Barn as the labor was taking awhile. I sat at the dinner table with each contraction, not being able to eat, while Jon easily ate his steak. I spent the entire night in pain before the contractions became 5 minutes apart and we were able to check into the hospital.

Miss Lillian Grace Sherman was born on June 20, 2006, and we brought her home on July 3. We lived in the hospital with her while she had to stay in for medical reasons, so when we brought her home finally, we were all coming home as a family to introduce Lilly to her house. She came home with oxygen tanks and medical equipment, and I remember so clearly everything being set up. And then holding my daughter in my own house, without nurses bothering me finally, and beginning our life as a family of three.

Lilly changed our world; a year before when it was just me and Jon, going to work, coming home, living our lives, it seemed so quiet, so boring, so dull. And then this beautiful little girl came into our world and things were bright, colorful, vivid. She was our little missing piece that made our family complete. We watched her grow and develop in this house, we met so many new people in town because of Lilly.

And then we left for a year, and when we got back last summer, picked up right where we left off. Our same house, same jobs, same daycare. Same friends, same restaurants, same life. Except for the incredible revelation that the little toddler we had lived here with before New Zealand had become a determined young lady. We celebrated her third birthday right after we got back, and saw all the ways she had grown up. She was walking and running; before NZ she could only walk holding hands. And this entire year she's grown up even more, and each day we fall in love with her just a little more.

In Charlottesville in the past seven years, I became a wife, a proud mother, a lawyer, and an expert on Down syndrome. Jon became a husband, a great father, and a neurosurgeon. And Lilly was born and has become such an adorable little princess, actress, and dancer. And let's not forget about the karaoke skills that she's developed here.

And in 24 days, we leave it all. We pack up the house on June 21, and our closing date is June 24. We will pack up all our memories along with it. I hardly recognize who Jon and I were when we moved to Charlottesville. It was our first time living far away from our family and friends, and we grew as a couple. Then came Miss Lilly, who completely changed our world. As she grew and developed, so did we. Memories of holding her as a tiny infant, the first time she smiled, the first time she signed and said words, the first time she crawled. We watched her touch so many hearts in Charlottesville, and we turned her over to a great surgeon who would miraculously fix her heart. We survived first colds, asthma, and having her tonsils & adenodis taken out. And we've survived the entire six seasons of Lost while living in this house; another end of an era.

I'm excited about New York. It will be a year unlike any other. And I can't wait to figure out where we go after that. But it is sad saying farewell to the city that we've lived in since we got married, where Lilly was born and grew up, except for our year abroad. We'll say goodbye to our normalcy and get ready for a new adventure, but we will miss you, Charlottesville! 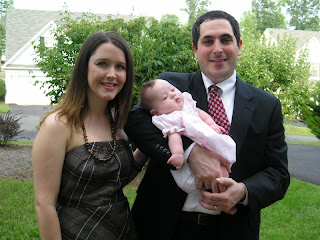 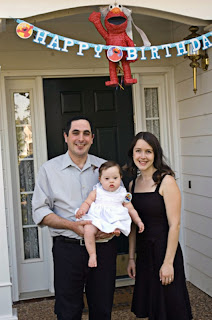 Lilly - age 3, right after we got back from NZ. 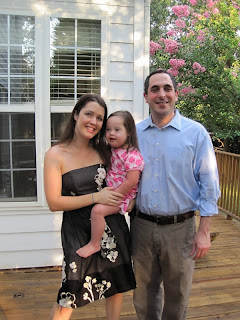 It's hard leaving "home". My husband and I just moved away from the city we grew up in and got married, had two children...and are now living in a totally different place for the first time. What a wonderful adventure you are about to begin! Lilly has become a beautiful little girl and she will touch many lives in your new home too!