Monday morning we woke up at 7am, and took a bus over to Polynesian for breakfast at Ohana. (using our meal plan credits) We had an 8 am reservation (originally thinking we’d hit Magic Kingdom right after, but changed our plan based on having a great night the night before; we had checked everything off our list, which mostly included seeing Princess Tiana). But, we kept the reservation out of lack of other options. There is a “breakfast” bus that takes the early reservation people where they need to go. We thought we’d have to go to Magic Kingdom and then take the monorail to Polynesian but instead they dropped us off (after stopping at MK and Wilderness Lodge first). We checked in, and were seated a few minutes later. Mickey Mouse, Pluto (who Lilly – and I – sometimes call Goofy), and Lilo and Stitch are there. Lilly has no idea who Lilo and Stitch are, but she was happy to take pictures when them anyways.

The breakfast itself was delicious though. Disney has the best scrambled eggs (or maybe just the Polynesian – because Kona café has them too). Coffee was good, special juice, breakfast potatoes, Mickey waffles, etc. A huge plate of fruit was served to us first and Lilly took it ALL in front of her and wouldn’t share. That’s my girl. There was an incident at breakfast that resulted in them giving us an extra dining credit back, so we were going to use it later that day somehow. 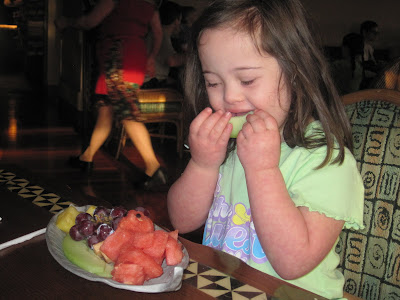 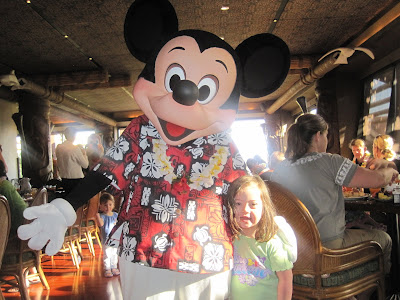 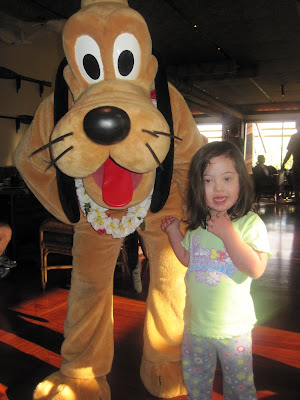 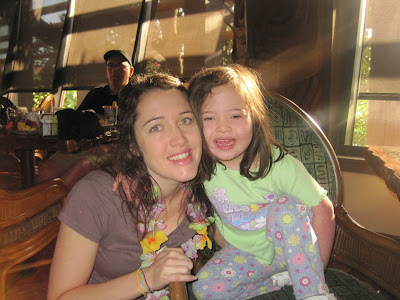 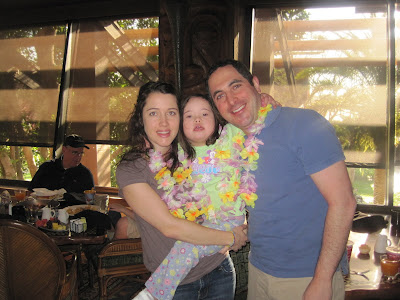 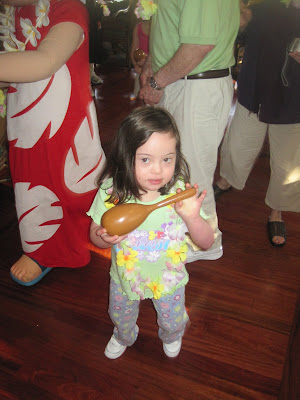 We left the Polynesian, took the monorail to Magic Kingdom, and took a bus to All Star. Lilly and Jon went to the pool while I packed (second day in a row of packing everything!). The nice thing about staying on property is that we could check in for the airline at the hotel, including our luggage/checked bags. So we had our plane tickets in hand at like 11 am that morning.

Next stop: Hollywood Studios. Which turned into arguably Lilly’s best day ever, in terms of quality fun experiences back-to-back. We got off the bus right before noon and bolted down to American Idol to catch the noon show. Lilly kind of likes American Idol – she doesn’t watch regularly this season (she’s watched in the past) but she’s seen a few minutes here and there – but she generally knows what American Idol is, she knows what the sign looks like, etc. She was thrilled to be there. Even though we were there right as they were shutting the doors, we magically got put in the second row. Lilly could see perfectly.

Lilly LOVED the American Idol Experience. Not overstating it, she loved it. I’m not sure if there was another person in the room that loved it as much as she did. She was so enthusiastic – clapping, laughing, excited. The loved each of the three contestants. She shouted out things, which sounded like heckling. She danced when appropriate, standing up and doing funny moves. And at different points in the show, she made eye contact with each of the judges as they waved at her, danced along with her, smiled at her. Wow, it was a moment to watch.

But it was over and we had places to be! We ran through the park to the Disney Channel Rocks show (formerly a High School Musical show, but now incorporates Camp Rock and some other shows). Lilly saw it a mile away and jumped out of her stroller literally landing on her feet running towards the stage. She snuck her way front and center in the audience, and danced hard, like a little girl should. She sang along, knowing all the words to the songs they sang. And when it was audience participation time, Lilly was picked with a few other girls (much older) to dance with the dancers. My girl was not shy, not nervous, not scared to be up in front of a huge crowd of people. She danced her heart out, and mommy loved watching her little girl shine. She was in her element. 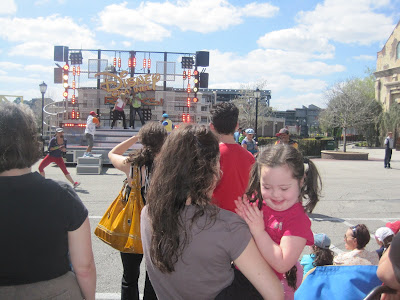 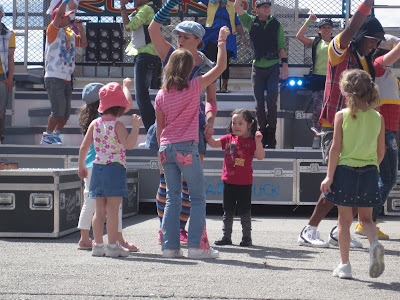 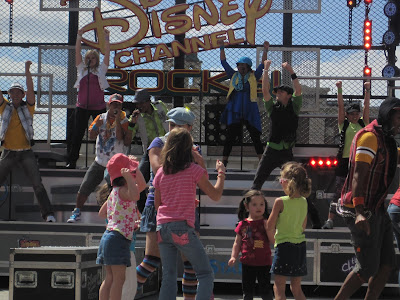 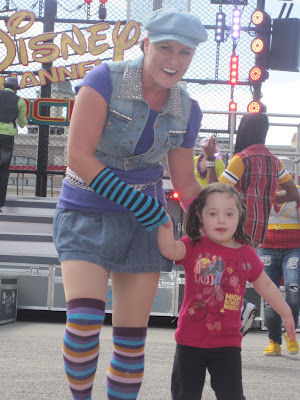 By this time it was HOT but we were having such a good day! We decided to sneak into the cool air-conditioned theater of the Little Mermaid – another classic “good reaction out of Lilly” show. She loved it, of course.

And then we went to Beauty and the Beast, which is more of a Broadway style musical performance. And Lilly (again) loved it. (When I say she loved it – I don’t say that lightly. She was enthralled with each of these things this day.)

But something bad happened as the show was starting. Both Jon and I got emails and voicemails that our flight was delayed 3 hours!! So instead of leaving at 7, it was now leaving at 10:30, and not getting into NYC until 1 am! I mean, I’m all for postponing the end of a vacation, but this was ridiculous. Our Magical Express pick up was scheduled for 4 pm, so we’d be at the airport 5 hours early, which was crazy. So while Lilly had the time of her life watching Beauty and the Beast, Jon and I were stressed. Also, around this time Jon lost the plane tickets (since we had already checked in) and Magical Express tickets, etc – but we found them 10 minutes later. Apparently, Lilly has become a pick pocket.

We called the airline and tried to get any other flight that day; they were all booked. We tried to get a later Magical Express pick up; they wouldn’t switch us. So, we made the best of a bad situation. We scheduled a taxi to pick us up at 7pm. And we got dinner reservations at Cat Cora’s restaurant at the Boardwalk.

While we figured all this out, Lilly watched the 3 o clock parade, and loved it. Usually we’re not in a park during “nap time” but we had no hotel room to go in anymore so there was no nap this day. Under the original plan Lilly would fall asleep for an early bedtime on the plane at 7pm. Now, we’d keep her up even longer! Or maybe she’d fall asleep while we walked around…

So my plan was that we’d walk from Hollywood Studios to the Boardwalk and maybe Lilly would fall asleep. After all, she did go to bed late the night before, and wake up early this morning. But I’m a naïve mamma. Lilly was going strong.

Did I mention it was hot? I was feeling winded. Lilly was exhausted though she wouldn’t admit it. We had an hour before dinner, so we did the only thing that made sense (for the Sherman family, apparently): we went in one of those double bike things with Lilly sitting in the basket part. And we rode it around the Boardwalk, past the Yacht and Beach club, Swan and Dolphin, and back to where we started. Lilly was ringing the bell, waving at people: “Hi everybody! Hi everybody!” 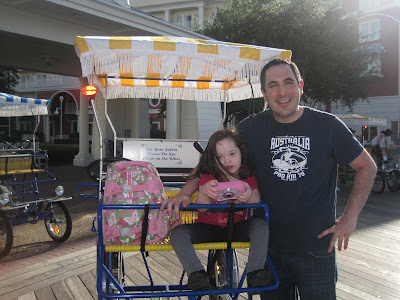 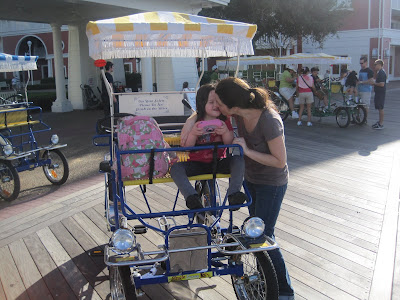 But when we got off, she was restless. Tired, hungry, hot, thirsty. We had water bottles but apparently Lilly is the Princess and the Water: it was “warm” and she wanted “cold.” She was so upset that our water wasn’t cold (especially after seeing cold water in a store and trying to take it!). We still had 10 minutes before the restaurant opened, and so Lilly and I went to the pizzeria and got a big cup of ice water – Lilly was thrilled and it made her feel so much better.

She was still a little restless during dinner, but inhaled the bread and pita. Dinner was delicious. Half of it was free due to our extra dining credit. Jon and I were happy with a glass of Sangria each. His meal came with a delicious dessert. It felt like the calm before the storm of going through the airport, getting to our delayed flight, getting to NY at 1 am, finding a ride home…

After dinner Lilly went to the potty and we jumped in a cab headed towards All Star, where we needed to pick up our two carry-on bags. The plan was for the cab to bring us on to the airport after, but when we got to All Start there was a Magical Express bus sitting there. Jon asked the driver if we could get on with our earlier passes, and he said yes – so it saved us $50 to have the free transportation.

When we got on the bus Lilly went to sleep. And she was o-u-t! We got to the airport and she didn’t wake up getting in her stroller. We walked through the airport, went into stores, she didn’t budge. It was 9 by the time we decided to go through security and wake her up. I was also nervous because she wears a pull-up at night when she sleeps and we didn’t bring one (they were in our checked luggage, because we thought we’d get in much earlier). But Lilly didn’t have an accident at all that night, which was helpful.

Finally we got on our flight and we were all so exhausted that we all fell asleep, even though I rarely sleep on a plane. But it had been a long day and a long trip! We finally landed at 1 am and got our luggage and called for the car we had reserved to pick us up, and after 10 minutes realized he wasn’t available. But luckily there was no line for taxi’s (it’s such a crapshoot that we’ve learned to reserve a car anyways; sometimes the taxi line is an hour long) and we were at our apartment by 1:30.

And yes, I made Lilly go to school the next morning. I’m such a bad mom. :)