This was another Disney excursion day. You see, what happened was, I was reading In Touch or Us Weekly a couple weeks before the cruise. And Leonardo Di Caprio was in Portofino with Blake Lively. And while it's not like I'm a huge Leo fan (I'm not not a Leo fan - but it's not like I'm obsessed with him or anything) but I am a fan of Lilly doing what the stars do, going where they go. If Portofino is good enough for Leo, certainly my 5 year old daughter should check it out. Right?

So, we booked the excursion that left from La Spezia and went to Santa Margherita and Portofino. We met up with our tour group as Chip, Dale and Minnie were taking pictures... 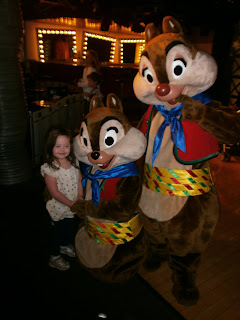 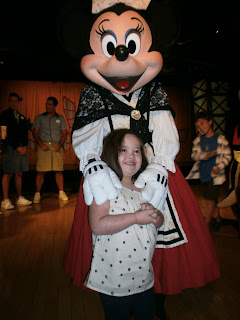 The history lesson we got (slightly different from the one in Rome) was based on celebrities. Clark Gable used to hang out in this area. Perfect. (Lilly is not obsessed with Gone with the Wind yet but she has an appreciation.) And many other celebrities, from the 1940's until present. In fact, when we got back, we realized we were there at the same time as Catherine Zeta Jones and Michael Douglas. (We were also in Malta a week or two after Brad and Angelina. Of course.) Anyways, it was a nice day to walk around these two cities, appreciate their beauty, and see how the rich people vacation.

Would I pick this excursion again? Probably not, only because for us I think we needed a down day after Rome, and La Spezia actually had a lot to offer, from the glimpse we got - on the water (not sure if there's a beach), playgrounds, restaurants. But, would I recommend this excursion? Yes. A lot of people did Pisa or Florence this day, and I think this was a good alternative to those areas. It was beautiful and calm and exactly what you'd think the area would be. I loved it. 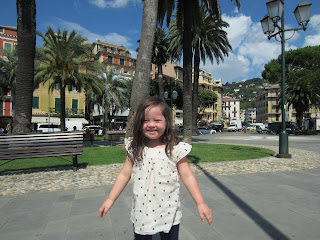 Lilly in the middle of town in Santa Margherita On a carousel. No playground in town, but a horsie ride is just as good. 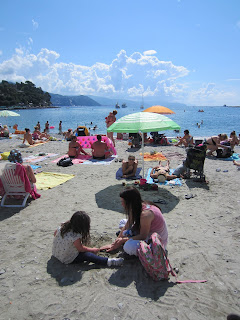 The beach - we didn't bring bathing suits (we should have) but we didn't have a ton of time either - we hung out on the beach for a half hour before meeting up with our group for a "pizza party." Which was all you can eat, but not nearly as good as the pizza in Naples - which was not to say it was bad pizza, but after Naples it's hard to eat any pizza. But a nice lunch either way, and the restaurant had a play area for kids which was minimal but nice. 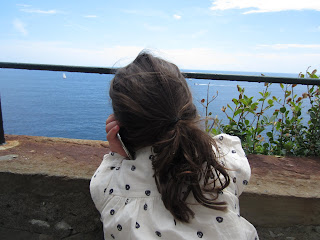 Lilly listening to her ipod in Portofino. 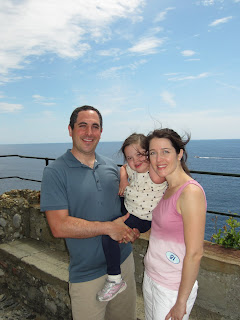 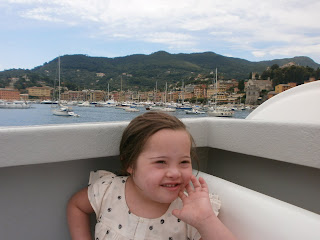 We had a private ferry that took us to Portofino from Santa Margherita. 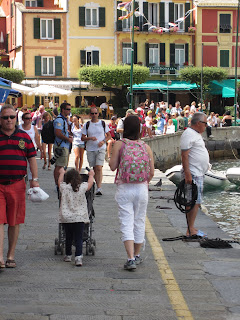 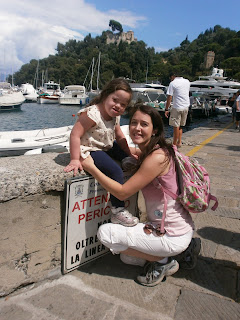 Behind Lilly and I is a castle that we walked up a gazillion steps to get to, because Lilly likes castles. She walked every step and it was exhausting for all of us! When we got there, we were so close to the castle that Lilly didn't appreciate it was a castle - she just saw a stone building - so we hiked another thousand steps down and when we got to the center of the city, Lilly was excited that she could see a castle far in the distance. *Sigh.* 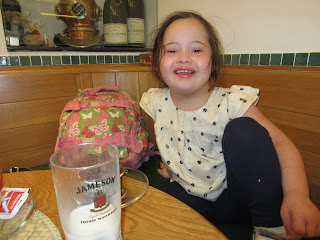 Lilly drinking whiskey - I mean, milk. We stopped for gelato in Portofino before heading back. 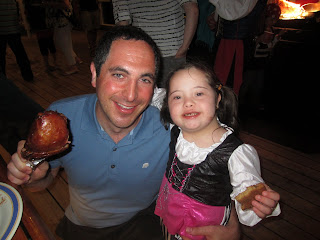 And finally, Pirate night on the cruise ship. Mommy went to bed at 10 but Lilly and Jon stayed up late. 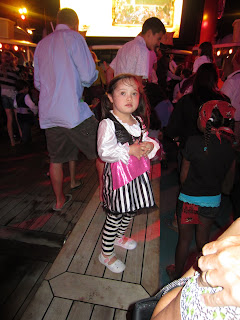 Thanks for the trip report, Cath. It sounds like a really great vacation.