A couple port days under out belt: the first touring a half day on our own, and the second doing an all day excursion. It was time to slow it down - and not just for pacing reasons. But, because it was the day I've been waiting months - years, actually - to experience.

Almost everyone from our cruise went to Pompeii, to see the ancient ruins which I hear are magnificent. Or, if they've already done so, they tour Herculaneum or go to Capri or Sorrento for the day. All totally valid choices. And we've been warned time and again how dangerous Naples is - a city that is too busy, too crazy, too dirty. But I had my eye on the prize. I wouldn't classify myself as a pizza conosier exactly, but I've tasted it from all over. I've had the best of Chicago. I've discovered good pizza joints in Atlanta. I created my own in New Zealand (and found one - just one - decent pizzeria in Auckland). In Charlottesville we've tasted it all and had a few favorites. And in New York City, the mecca of good US pizza, we tried it all - watching Food Network shows about the best local pizzas, asking around, and eating as much as we could wherever we could.

So in Naples, neither history nor beauty would make me turn my back - er, stomach - from what they say is the best pizza in the world. We'd tackle the crazy dirty dangerous city for the best pizza of my life.

We woke up this morning, in no rush. I think this was the morning after we were out late with our cruise friends doing a grown up scavenger hunt, while the kids were in the kids club until midnight or so. But we had no plans that morning so Lilly slept in until 9:30. We again got coffee first thing. I can't remember exactly but I know we didn't eat anything and I'm pretty sure Lilly didn't end up eating anything either. When you're about to have the best pizza ever, you want to be hungry, so we skipped breakfast.

We got off the boat around 10:30 am, thinking the pizza place would be open at 11 or 11:30. We carried nothing with us - because everyone had terrified us so much about Naples. I took off my diamond engagement ring, just leaving my small wedding band. We didn't bring our camera, just Lilly's inexpensive one. Jon carried just enough money for food in his front pocket, and his hand never left it. No backpack, nothing else. We dressed down - I don't think I wore makeup, and we all wore tshirts and jeans. Lilly wore boyish looking pants, didn't want her to stand out as being too cute (it's hard!). Seriously, people had freaked us out and I was nervous but nothing would stop me from the pizza.

We got off the boat and found a map at the entrance to the port. We had directions that we printed out but they weren't that helpful, but we figured out where we were going. For anyone who needs help in the future: when you get off the cruise ship in the port, you'll see a castle looking thing a couple blocks away towards the diagonal left. If you walk a couple blocks more diagonally, you'll get to a square. Right near there is the pizzeria of choice: Pizzeria Brandi. We got there a little after 11 (it's just a 10 minute walk if you know where you're going) and we found out they didn't open until 12:30 on Sunday. So, we decided to kill time and walk around. We found a big open square a block away - and church bells were ringing. It was beautiful. 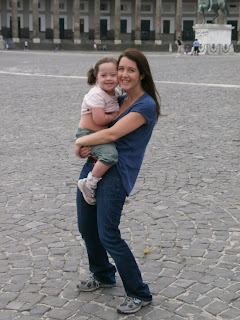 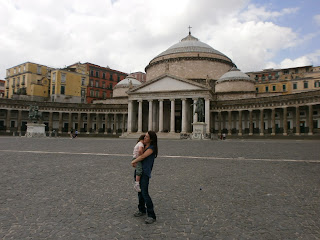 I started to realize my impression of Naples was wrong. Sure, maybe it's dirty or unfriendly or dangerous, but remember, we're coming from a year off New York City. It looked clean and nice to us. And with nothing of value on us - besides Lilly - we felt perfectly safe. It was Sunday morning, so maybe it was a little quieter than normal, but we totally loved the city.

We stopped at a nearby cafe on the corner for a cup of coffee. The staff was a little rude at first - which made us homesick for NYC - but after we ordered our drinks, they got a lot nicer. We ordered in Italian as the server spoke no English - but a few minutes back we realized he had just pretended not to speak/understand English, as he asked us in perfect English: "So, were are you from? New York City? I love NYC." 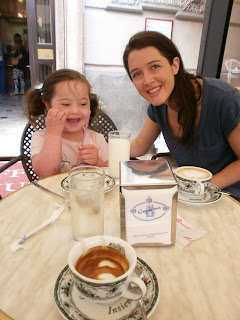 The best coffee of Jon's life. And, Lilly was happy because a waitress gave her two little drink umbrellas. 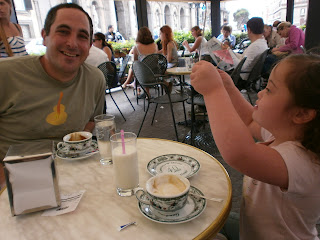 Afterwards we went for a walk down a tree lined street nearby. Naples was so pretty! 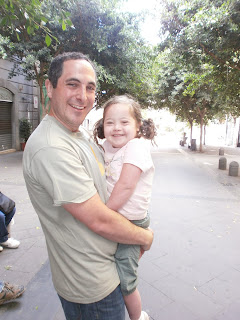 Here are Jon and Lilly outside Pizzeria Brandi (in the background) as we waited for it to open. 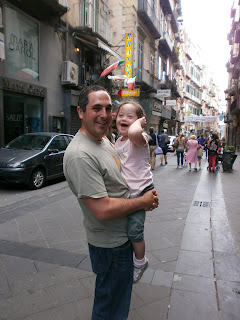 And walking down a side street. I think it's a pedestrian street without cars, but motorcycles could ride down it. And, for those who warned us about it being scary to cross streets because of the crazy traffic: it wasn't bad at all. Again, it was a Sunday, but our NY savvy and confidence prepared us for crossing the streets. If we hadn't come from a big crazy city then perhaps Naples would feel slightly overwhelming - but it seriously wasn't as bad as NYC in any aspect, in my opinion. 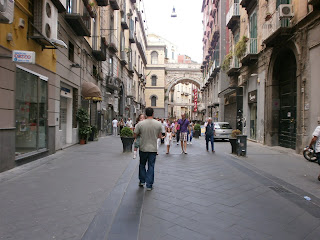 And the most important moment of the trip: the Margherita pizza. I had a certain thought in my head about how delicious it would be, imagined what it would taste like. And let me say: it was even more incredible than I had imagined. Not only best pizza of my life, but the best meal of my life hands down. And in my top 10 experiences of my life, up there with giving birth to Lilly and marrying Jon. Oh my goodness amazingness. 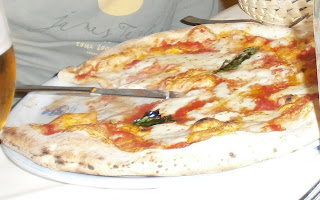 Jon and I each ordered our own pizza - which were huge - and ate the entire thing. Lilly had a slice but she ate bread after that, which made us happy because we didn't want to share. And FYI, the pizza is served whole, not in slices. Apparently the traditional way of eating it is to fold it in half and in half again and just take big bites. Or, tear it and eat it. We cut some of it, and just devoured the rest. It was the best tasting thing ever. 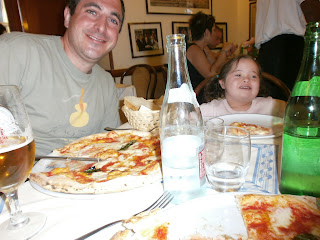 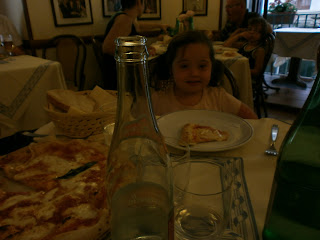 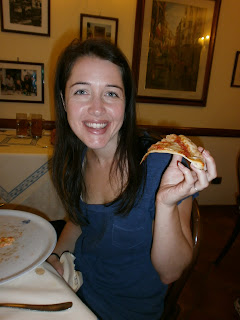 The rest of the meal at Brandi was good as well - the server super attentive, a big basket of bread, a delicious salad, sparkling water and bottled water (the sparkling water was probably the best I'd ever had as well), and Jon had a delicious beer. Every single person in the restaurant each ordered a whole Margherita pizza per person, it was funny to watch - they all know how amazing it is. Anyways, amazing meal for the family. Totally didn't let me down at all. 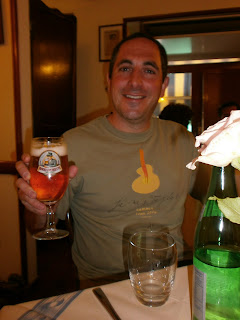 And after, we got Gelato from a street cafe. Lilly loved it. 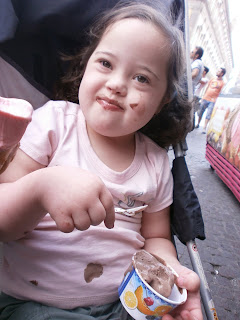 Our day in Naples was wonderful - probably (arguably) the favorite of our trip. It was laid back and relaxing, Naples was pretty and charming, the food was insane, and it was just a nice family day. The rest of the day was spent napping (Lilly), doing laundry (me), I think an hour in the kids club before dinner (Lilly), and a nice dinner with our friends including local Limoncello and wine that we bought in Naples. Next stop: Rome.
Posted by Cathleen at 4:05 PM

I don't think that dressing Lilly in jeans and a t-shirt will fool anyone about her too-cuteness...LOL

Drooling over that pizza right now...omg...